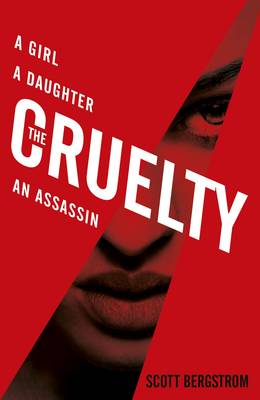 We are barely into 2017 and I am already going to call The Cruelty as one of my top ten kids/young adult books for this year! There is really only one word to describe this novel – Kick-ass! Not the most eloquent description I know but it really is like a kick to the stomach that will leave you breathless.

Ten years ago Gwendolyn’s mother was killed right in front of her eyes. Since then it has been just her and her Dad. But nothing is really as it seems. While he is on a ‘business trip’ to Paris Gwendolyn’s father disappears. She is about to find out her loving diplomat father is actually a spy. The kindly old neighbours who she loves like Grandparents are also spies. The problem is everyone seems more concerned that her father may have defected than in actually finding out what has happened to him.

Now the only person Gwendolyn can rely on is herself. And she isn’t going to let anything or anyone get in the way of getting her Dad back. Diving head-first into the seedy European underworld of drugs, violence and prostitution Gwendolyn must decide who to trust and who to hurt. With moves and counter-moves, double-crossing and the danger escalating there is no place for mistakes.

I couldn’t help comparing The Cruelty to my all-time favourite young adult series, The Hunger Games. Not the story lines because they couldn’t be any more different. The strong female leads of Gwendolyn and Katniss, however struck me because of how confronting I found The Cruelty. In the end it all came down to the fact that Gwendolyn goes where Katniss won’t. Katniss shows a reluctance to harm and when she has to it costs her emotionally. Gwendolyn has no such qualms.

This is a coming of age story like no other. Imagine if Jason Bourne was female and sixteen. That just about sums up The Cruelty. Rocketing along at breakneck speeds it will leave you shocked, thrilled and horrified all at the same time. And with the promise of more to come Gwendolyn may be about to do for self-defence classes what Katniss did for archery.

Smart, dangerous, kick-ass (yes, really) and an absolute page-turner, The Cruelty, is sure to be one of the hits of 2017. Look out Katniss – here comes Gwendolyn and she’s about to kick your butt!

One thought on “Review: The Cruelty by Scott Bergstrom”