After absolutely adoring My Life Next Door, I was super excited to pick up Huntley Fitzpatrick’s companion novel: The Boy Most Likely To. Was it good? OH YES VERY MUCH SO. But before we dive into my (ah…flailing) review — I do think it’s important to read My Life Next Door first! While the companion novel is by the point of view of a different character, the first book does provide needful backstory. 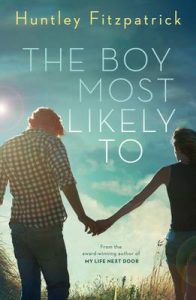 The Boy Most Likely To is about Tim who is, basically, a drop-kick. He’s been kicked out of school, he’s got severe addiction habits, and his own family doesn’t really want anything to do with him. But he’s cleaning himself up! He’s going to AA meetings and he’s living above the garage of his best friend’s house: Jace Garrett. The Garrett family has, um, a gazillion kids and they are just downright awesome. And Tim has a ginormous crush on the oldest daughter, Alice — although Alice is about as warm and cuddly as an iced over cacti. Good times! And just when things are looking up, Tim gets a HUGE BOMB DROPPED ON HIM that changes everything. Still more good times!

It’s such an adorably tragic story at time that my heart hurts. I was a fan of Tim already from My Life Next Door, but this just cemented my love for him. (Plus anyone who’s name is “Tim” automatically reminds me of Tim Tams and that’s just beautiful.) I loved how sassy and witty Tim’s comebacks were! Plus his character development is just amazing throughout the story. I loved being in his perspective! Although it was super sad at times…because even though he’s trying to kick his addictions, he still has so much baggage from them. Plus his family is 0% supportive. It would be so hard to be strong and stay on track with s little support.

Plus I really like how this book talks openly about addictions and recovery. Tim is a recovering alcoholic. I do see many YA books talking about falling into the addiction route, but rarely do I find one that is about getting out of it. So this is such a super important story! Seeing the fall is needful: seeing the recovery is twice as important.

But let’s talk about Alice! The book is actually dual-narrated by both Alice and Tim and I’m immensely pleased about that. Because while they like each other, they’re not entirely honest. Tim covers up his attraction to Alice with sassy jokes, and Alice is too sharp to admit she has intense feelings for Tim. Please, children. TALK TO EACH OTHER. Alice is also under a lot of pressure to look after her million-and-two-siblings after her father’s accident and her mother being pregnant again. Plus she’s had to divert her nursing course. Poor Alice. I get why she’s so sharp! But it was agony waiting for her and Tim to move past that and admit feelings for each other!

Also, of course, we must mention how awesome the Garrett family is! I love reading about big families! And the representation here is on point. Just the kids’ banter and the messes and dynamics…ahhhh! It was honestly perfect (and this is coming from someone who has first hand experience with large families: ahem, that would be me).

Of course there are plenty of plot twists that will keep you glued to the page. And there are a lot of pages actually. I thought, at 500-pages, it could’ve sped things up a little and not dragged so much in the middle. But considering these characters are adorable, I didn’t mind too much. Plus the plot twists were just WOAH and equal parts adorable and daunting. The story will definite have you feeling aaaall of the things.

Basically, The Boy Most Likely To is a new favourite contemporary of mine! It had feels! It had big families! It had tragic but adorable protagonists! Tim and Alice were far from perfect and their relationship was rocky to say the least, but it was so so excellently written.