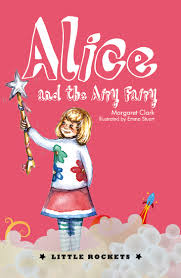 The rapidly expanding Little Rocket Series more than satisfies the insatiable reading appetites of confident readers, dishing up enticing junior fiction that most notably snags the fickle attention spans of boys. Alice and the Airy Fairy, the latest in the series, has a decidedly more girly flavour.

Packed with pretty pink girl appeal, the Airy Fairy is more than a whimsical tale about fairies. It’s a story steeped in sensitivity, family relationships and the power of believing.

Alice’s second cousin, Mary, is coming to stay with them. Mary is a little eccentric and a touch mystical. She plays the flute in the middle of the night and prefers to sleep out in her ‘old blue campervan’. All of which Alice’s Dad sums up as being an ‘airy fairy’.

Alice is entranced by Mary’s presence and being a great believer in fairies herself, tries very hard to get Mary to divulge more of her ‘fairy-ness’. But the deeper she and her best friend Zoe, delve, the more inconsistencies they discover, including the revelation that all is not well in Mary’s world. She is sadder than a fairy ought to be for one; evident in her wrenching paintings, her droopy wings and her pensive music. And she can’t even remember where she left her magic wand. As the lines between fairy-dom and reality become as increasingly blurred and misshapen as one of Mary’s blue blob paintings, Alice and Zoe attempt to get to the bottom of Mary’s malaise and missing wand. The wand is eventually found but no amount of magical incantations issued by them is able to release its magic.

Frustrated but not defeated, Alice convinces her father to transport a selection of Mary’s abstract paintings to the Art Gallery where she was due to exhibit them. Mary is unable to do so herself because of an unplanned visit to the hospital.

In a comical turn of events, Mary’s paintings prove so popular the gallery curator asks for more to sell, which Dad dubiously concedes to. Only the first set of paintings weren’t actually Mary’s. They were the mistakenly delivered, genius brushstrokes of Bonnie, Alice’s baby sister.

But it’s not art that saves the day or even stubborn magic. It’s Alice’s unshakeable belief in Mary that finally enables her to refocus on where her true worth and value lies.

I love how Alice’s naively bejewelled determination is able to cut through diversity and adult opinion to help someone she genuinely believes in.

Veteran children’s writer Margaret Clark has created an enchanting story that encourages young readers to question everyday norms. She sprinkles just enough speculation throughout each short, easy to read chapter to ensure Alice and the Airy Fairy is as easy to love as fairy dust but is still one hundred per cent plausible, while sending a gentle reminder for us to be kind to and aware of each other. 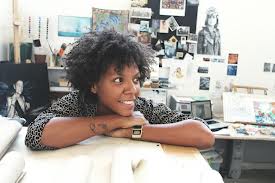 Emma Stuart’s touching illustrations add even more colour and joy to an already joyful read. And in case you are ever in the need of one; there are even instructions on how to make a magic wand. Fantabulous!

Whether you’re into fairies and Kombis (and who isn’t?) or not, Alice and the Airy Fairy is sure to charm the wings off you, especially if you are 7 – 10 years old.