My first foray into the sea was a moment in time I remember as vividly as a blistering Aussie summer sky. It was in the surf off Magnetic Island in a sea a mere metre high but to a person of toddler stature, the waves were mountainous. It was a character building exercise my mother seemed intent on, not relinquishing her grip on my wrist for a minute. As she dragged me further in, my apprehension escalated and I begged her not to let go. However high expectations can assuage fear and doubt and in A Swim in the Sea, Bruno experiences all these sensations. Bruno has never been to the beach before. He can’t wait for Mum and Dad to have breakfast and pack the car. He is simply busting to get there and searches excitedly for his first glimpse of ‘the big blue sea’.

At first it is every bit as exhilarating as he anticipated; all ‘sizzling sand’ and ‘salty breezes’. But Bruno’s enthusiasm soon ebbs as he is confronted by his first wave and alas, like me, is slightly overwhelmed and terrified by the huge, ‘white foamy wave monster’.

All that sparkled minutes before becomes dark and threatening for Bruno and no amount of exotic sea-creatures or rock pool treasure can entice Bruno out from his dread until his sister, Tessa, enlists him to help build the wall for the family sand castle.

Perhaps Bruno is feeling a little sheepish after his encounter with the big blue sea. Maybe it’s the sensuous feeling of the sand as he digs that lures him out of hiding. Or it might just be being part of a team that helps Bruno finally regain his sense of purpose and fun because soon the castle is enclosed with a magnificent wall, strong enough and high enough to withstand any rougue wave…almost.

A Swim in the Sea is as enjoyable to read as licking a cone-full of gelato. Sue Whiting neatly avoids the usual beachside unmentionables such as sea lice, sunburn, stingers and sand in your togs in favour of the less tangible emotions of excitement and anxiety. The naivety Bruno possesses not only fuels his expectations but also foments his apprehensions into something almost too gigantic for him to deal with; as gigantic as the ocean itself. Just as Bruno has us teetering on the edge of fear, Whiting draws us back with reassuring images of backyard paddle pools and ‘sparkly blue jelly’, images that any kid, even those who’ve never breathed in the briny scent of the sea before, can relate to.

The beguiling acrylic paintings used by Meredith Thomas to illustrate Bruno’s adventure swirl and surge across the pages providing bucket-loads of textural depth and fluidity. 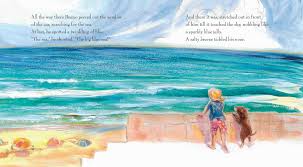 I especially love Bruno’s faithful little unnamed brown dog who mirrors every moment of Bruno’s pleasure and pain, and ultimately relishes his swim in the sea as much as Bruno.

A Swim in the Sea is a superb little slice of summertime fun and perfect to read with pre-schoolers, beach lovers and those still slightly wary of the surf like me.

Because overcoming your fear and enjoying the moment is often just a matter of letting go, which thankfully my mother didn’t.

Check out more of Sue Whiting’s books and buy A Swim in the Sea here.