Peter Carnavas is an award-winning children’s author and illustrator, some of his titles including The Children Who Loved Books, Last Tree in the City, The Great Expedition, The Boy on the Page, The Important Things and Jonathan!.

Peter’s books consistently provide both children and adults with heartwarming, humorous and thought-provoking experiences that leave a lasting impression. His illustrations always showcase his talent in portraying beautiful expression and sensitivity. He also balances a perfect mix between detail and playfulness, and spreads that make a simple yet dramatic statement. 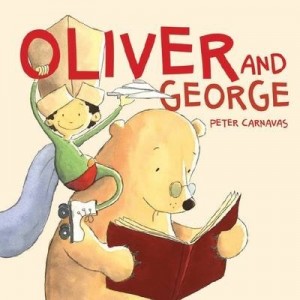 Today I present you with Peter’s latest adorable read-aloud story, Oliver and George, and I am lucky enough to have had the talented author / illustrator himself answer some behind-the-scenes questions!

I love how we are introduced to the characters. Immediately, they capture our attention.
Oliver sure is ready to play. He’s dressed in a multitude of outfits; he’s a swashbuckling, sword- and hook-bearing pirate with a rollerskate on one foot and a flipper on the other, with a box for a hat and a superhero suit and cape. Then there’s George. George is a serious, spectacle-wearing bear. He’s busy… reading.
Oliver can’t wait for George to finish his book.
”’In a minute,’ said George.”
Oliver tries to be patient, but that doesn’t last very long. So he throws a paper plane at George, and breaks his chair, and tips porridge on his head, until George got so mad that he… didn’t do anything.
Oliver continues to pester George until at last he gets some attention. But is it the attention he wanted? And are both Oliver and George finally ready to play?
With adorable illustrations showcasing the parent-child-like relationship between the characters, simple yet effective page layouts with white backgrounds and sizeable text, Peter Carnavas’ Oliver and George is a delightful, cheeky and charming story about patience (and sometimes losing it) for young readers to giggle through from start to finish. How did the idea for Oliver and George come about?
I was on the plane to Perth, scribbling away in my sketchbook.  I had been thinking about a bear character for a while – I guess almost every children’s author has done it – and finally thought of creating a bear character that really didn’t behave the way in which the reader expected or wanted.  I think I had the wonderful No Bears (Meg McKinlay/Leila Rudge) floating around my head as inspiration.  I decided to add the cheeky Oliver character and, together with George, the two of them form a bit of a sibling relationship or, more likely, a parent-child relationship – the child bugging the parent to play, but the parent is always too busy.

Are these characters based on anyone you know?
No, I didn’t base them on anybody.  However, since I’ve made the book, I’ve noticed members of my family behaving very much like Oliver and George.  We bug each other for attention, or tell each other, “In a minute”, when asked to do something.

Have you ever broken someone’s chair?
I have!  When I was ten, I remember drawing a picture that didn’t meet my expectations and I kicked one of our dining chairs out of frustration.  I was a quiet kid but very occasionally I snapped – much like George.  Dad made me pay for the chair out of my pocket money.
I also punched a boy in Grade One for snatching a book from me. My teacher smacked me and I never punched anyone again (apart from my brother).

How long did it take you to write and illustrate Oliver and George?
It didn’t take me too long to write the first draft but then I rewrote it many times, swapping ideas with my editor, changing the bear to a crocodile at one stage (didn’t last), and playing around with the ending a lot. I received some advice from some teacher-librarians about the ending, which helped a lot. So it’s hard to put a timeline on the writing process – it tends to happen in-between everything else. The illustrations probably took a few months, over the summer.

What’s your favourite animal to illustrate? Why?
It changes all the time.  At the moment I love drawing whales and penguins.  My favourite part of drawing any animal is dressing them up a little and giving them human expressions with the slightest details – small eyebrows and things like that.

What can us Peter Carnavas fans look forward to seeing from you in the near future?
You mean there’s more than one of you?!  I’ve written a really fun book called What’s In My Lunchbox?, illustrated by Kat Chadwick.  It’s a fun, read-aloud book aimed at a young audience, much like Oliver and George. It will be out in early 2015.
I look forward to its release!

Thank you so much for answering my questions, Pete!
You’re welcome!

Peter Carnavas, with the help of Pat Flynn, will be launching his new book, Oliver and George, on October 25th at Maleny Library, Queensland.
See http://www.newfrontier.com.au/events/oliver-and-george-book-launch/850.html for more details.
http://www.petercarnavas.com
https://www.facebook.com/pages/Peter-Carnavas-AuthorIllustrator

One thought on “Ready to Play: Peter Carnavas bears all on ‘Oliver and George’”