Warning: Spoilers will be a necessary part of the discussion of this novel, so if you are interested in reading Villette for yourself you may wish to bookmark these discussion posts and read them AFTER you have read the novel. 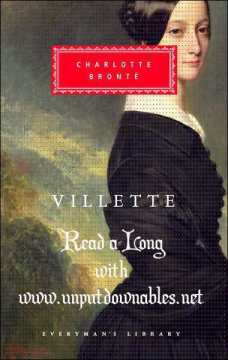 As far as I’m concerned, you fall into one of two groups with the Brontes: those who prefer Emily’s Wuthering Heights, and those who more inclined to enjoy Charlotte’s Jane Eyre. I am a fan of the former – Wuthering Heights is just so darkly ROMANTIC and PASSIONATE that any Jane Eyre theatrics tend to pale in comparison. But it is Villette, by Charlotte Bronte that Virginia Woolf declared to be Bronte’s “finest novel”.

For me, the first five chapters of this novel absolutely flew by. The reader is first introduced to the novel’s protagonist, Lucy Snowe, through a recollection of memories of her time staying at her godmother’s house: a place that she refers to as “Bretton”, the household’s surname. Snowe tells of the attention she receives as the household’s only guest child, but I adored the introduction of six year old Paulina (“Polly”) who suddenly descends upon the Bretton household in rainy weather; a proud little princess with “her neck delicate as wax, her head of silky curls” [page 10], seeming to act a caricature of someone two to three times her young age. It is through Lucy’s eyes that we observe Polly’s sudden and passionate attachment to Graham, a bright and jovial sixteen year old, and Polly’s sadness and fear at leaving Graham and not being his “favourite” when she is called away by her father and must leave the house to meet him. I couldn’t help but wonder at Snowe’s observations of the people around her: she finds Polly’s dramatics peculiar and considers Graham “spoilt”. By comparison, Lucy herself appears neutral and well-possessed… I will be interested to see how this personality progresses the novel and whether she remains unmoved, or whether she experiences a change within herself.

We move on to Snowe’s own quitting of Bretton, and her subsequent depression/loneliness which she never voices to anyone, describing the feeling as the pressure and icy coldness you would feel on a boat in stormy seas. Already I’m sensing the reason for Villette’s celebration as a literary masterpiece: a work of existentialism before existentialism even existed. Snowe is thus compelled to change her habitat, and takes up residence with the kind Miss Marchmont as a live-in nursemaid until her death. Again there is this sense of fear of upheaval and despair…but I was forced to leave Lucy apprehensive and anxious at the end of Chapter 5, travelling to London in the hopes of picking up a governess position with a city family.

I’m loving Bronte’s clear and concise prose, and the blinkings of gothicness. There’s a certain poignancy to Snowe’s character developing for me, I’m looking forward to seeing how this new governess position affects her inner self…

If you’re interested in reading others’ thoughts on Chapters 1 – 5, head on over to the Unputdownables. I’ll be discussing the next group of chapters next Thursday/Friday.