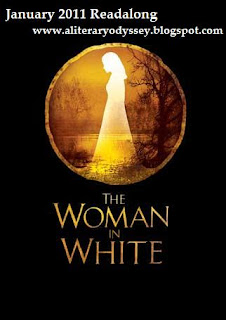 This read-along discussion, as suggested by host Allie, will be in two parts. The first 300 or so pages are to be discussed between 14th and the 17th January on the participating blogs, and then we reconvene between 24th – 27th January for the remaining 300 or so pages of Wilkie Collins’ classic The Woman in White.

I’m 309 pages in and I’m starting to get a feel for this woman in white. Mysterious, suspenseful, but not wholly terrifying (I’m a bit of a scaredy-pants – have you noticed?). I am, of course, biased towards its gothic feel – there are fragile ladies complete with fluttering handkerchiefs and doe-eyed expressions; educated gentlemen who delight in ladies’ fragility; soft-spoken invalids and sensible females who (alas!) can’t rely on their femininity to get them through life because they’ve been beaten over the head with an ugly stick. A spinster without a thought for marriage. Oh yes, Wilkie Collins goes there.

When I began the book this time (my second attempt), I was only glad I had committed myself in front of other people (the other read-along participants) because I found the story to be insufferably slow and meandering. The words wanted to move against each other at a particularly languid pace, so if one wanted to make sense of the sentences it felt like years before I was allowed to turn the page! It seemed that despite readers saying that the story starts slow but then becomes an addictive read, I wasn’t going to fall in the same boat.

Then, as if being tipped off balance and by complete surprise, I fell into the boat with a thud.

The infuriating snail pace of the book sped up as soon as I left Mr Hartright behind. As the first narrator of a mystery novel which holds a number of narrators, I was relieved to find that (in comparison to the other characters) Walter Hartwright had spoken and narrated like an absolute ninny, and I wasn’t going to be subjected to his narratorship any longer. It was as if someone had shoved seeds down his throat and the resulting flowers had grown upwards and addled his brain. I was irritated by his complete lack of wit and his ability to so easily fall under his student Laura’s spell. I also couldn’t stand his girly ‘stolen glances’ and the overriding fearfulness that his feelings for Laura should be found out by someone in the household, even Laura herself.

And as for the clear-eyed, soft-haired, sweet-natured Laura – she frustrated me equally. Weak and trusting, the only time Laura displays a backbone is when there is a clear indication she’s making the wrong decision for herself and others. All signs point to the courting Sir Percival as a gold-digger, with her most trusted advisors (Miss Halcombe, Mr Gilmore) being against the union, so what does she do? Propels herself into the marriage and takes poor Miss Halcombe (the expected spinster) with her, to live in perpetual discomfort with a husband who seems to be motivated by a mysterious-but-definitely-nasty personal agenda.

As compensation, Miss Halcombe is a highly likeable female character with more than a few masculine traits to make up for the dandified Hartright and the paper-thin Laura. Miss Halcombe seems to have appointed herself as Laura’s emotional and financial guardian when all this reader wants to do is give Laura a kick in the pants (bloomers? petticoats?). The result of Miss Halcombe’s sensible nature is that she tends to echo the natural reader response: most notably that she is suspicious of Sir Percival’s motives for the quickie marriage to her beloved Laura. Although my favourite narrator so far is the family’s lawyer, Mr Gilmore (who tells his small part in the story with heroic gusto), the sensible penmanship of Miss Halcombe tends to reveal the most about the story’s central events and characters. Count Fosco is perhaps my favourite character depiction: for some reason he reminds me of Marie Antoinette’s archnemesis Du Barry with his fondness for exotic creatures. I know the Count can’t be trusted and he’s creepalicious but I love him! And I hope he plays an important part in unravelling the mystery of the woman in white.

I hope I’m not disappointed!

Do you love the Penguin hardcover edition of this book as much as I do? Really evokes that strange, dark-night atmosphere. In part two of the discussion I will be displaying a softcover edition which is much more gregarious to look at, but to my mind equally as enticing.