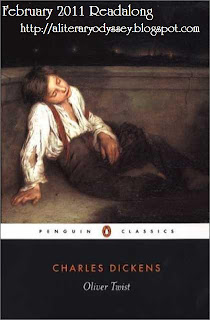 February’s read-along choice over at A Literary Odyssey is Oliver Twist, by Charles Dickens. This time, participants will be reading the book in three parts:

Thoughts on Chapters 1- 22 will be posted on participating blogs on February 8.

Thoughts on Chapters 23 – 37 will be posted on participating blogs on February 17.

Thoughts on Chapters 38 – 53 will be posted on participating blogs on February 28, and will conclude the read-along for the month of February.

I’ve only read two Dickens novels: David Copperfield, which I remember enjoying when I read it years ago (though the details are hazy); and A Christmas Carol, which I ADORE and attempt to read every year leading up to Christmas. Yet how many times have I heard the advertisement for the live musical on TV, or an old movie, with a little boy questioning: “Please, sir, may I have some more?”

I ventured into this read with the participants of the January read-along’s reluctance fresh in my mind. By and large they seemed to feel that Wilkie Collins was much more enjoyable/easy to read than Dickens. Upon consideration of the labourious time I experienced during the first half of Wilkie Collins’ The Woman in White, I think I feel the opposite: for all Dickens’ love of commas and hatred of full stops, I find that his writing flows better for me than Wilkie’s. But it is all down to personal taste, I’m sure.

So, first things first: the protagonist – a little orphan boy named Oliver – I don’t think I have quite figured out yet. Certainly he is the recipient of large injustices and general “life-is-unfair”-ness. At times he shows a bit of spark against his early enemies at the orphanage (and they are formidable), but HONESTLY: how much bad luck can one little boy (and one reader) take?! Yes, yes, there are some beautiful sentence and paragraph descriptions, like this melancholy one which made me clutch at my heart for a moment:

“The boy had no friends to care for, or to care for him. The regret of no recent separation was fresh in his mind; the absence of no loved and well-remembered face sank heavily in his heart. But his heart was heavy, notwithstanding; and he wished, as he crept into his narrow bed, that that were his coffin, and that he could be lain in a calm and lasting sleep in the churchyard ground, with the tall grass waving gently above his head, and the sound of the old deep bell to soothe him in his sleep.” [Page 36]

…but I am SINCERELY hoping that the second and third parts of the book lay off the odes to “poor little Oliver Twist” and get on with the story (hmmph). I realise in saying this I’m probably being unfair myself – there are some shots of comic relief amid all this dreariness (“the olden times” had a sense of humour closer to our own than you’d first suspect). Still…it all gets a bit much for this unfeeling reader!

Turning now to an immense positive of the book… if Wilkie Collins is the King of Characterisation, Charles Dickens is the Emperor of Scenery. Sense of place in Oliver Twist is so supreme, that often I felt the grime of the Victorian backstreets on my fingers, and would hastily wipe my hands on my pants before I turned a particularly descriptive page. Villains sprout from the environment with their dirty toes half-stuck in the rotting floorboards; thieves and other nasty-minded citizens slink in the shadows; the cruelty of a recent and untimely death unfurls like smoke in the air. And when Oliver is drawn into the set of a particular unsavoury bunch, I almost set to weeping (if weeping was done at all these days).

Yet as I venture into the second part of Oliver Twist, there is hope for the young boy yet. What are his true origins? Why does he look the spitting image of the boy in the portrait? We shall have to wait and see…