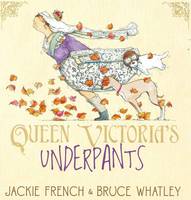 Given my infamous obsession with all things underpants, and considering that I pride myself on being relatively across Australian illustrated book royalty Jackie French and Bruce Whatley’s oeuvre, I’m not sure how knowledge of Queen Victoria’s Underpants slipped past me.

Nonetheless, I’m rectifying that now. I mean, really, what’s not to sell you on a book about underpants like an illustrated cover featuring a windswept dog? Two windswept dogs if we’re going to argue semantics.

Queen Victoria’s Underpants is a whimsical tale with an important historical bent. Until Queen Victoria popularised wearing underpants, few women wore them (something that is, these days and to a underpants connoisseur like me, almost inconceivable).

Her championing of underpants meant—and here’s the kicker—that girls then had the freedom to engage in activities otherwise considered, without the modesty aid of underpants, to be unladylike or risqué. Cue horse riding and bike riding and dancing and archery …

Queen Victoria ruled half the world, the book’s un-named protagonist tells us, but she, like most people of her time, was underpants-less. ‘What if the wind blows the Queen’s skirt up?’ is the question that’s posed to refute the archaic claim that the Queen had no need of undies.

Broken down, the Queen Victoria’s Underpants’ premise is my friend’s someone did something incredible [insert heavy-hitting historic figure and their claim to fame here]. But her mum (as in the protagonist’s mum) made Queen Victoria’s underpants. This is the moment that the ‘My dad, picks the fruit …’ celebrating-the-everyday Cottee’s cordial jingle entered (and still hasn’t left) my head.

The tributes at the book’s beginning are whimsical, with double meanings set to deliberately sail over its target audience’s heads. French’s reads:
To Bruce, Lisa, Jennifer and Natalie, with love and enormous gratitude … playing with royal underwear has never been so much fun
.

Whatley’s reads:
For Lisa, who keeps me busy enough to afford clean underwear every day. 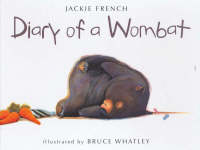 The illustrations are, as always with this pair, complementary and complimentary all at once. The dogs’ facial expressions are, hands down, my fave elements.

I’ve got to say, though, that Queen Victoria’s Underpants is a bit light on substance—I expected more and better from such an accomplished, well-oiled writing-illustrating team as French and Whatley. I’m admittedly not in this book’s target readership, but I’d still argue that it doesn’t cater well to either kids’ imaginations or wink at adults—or do both, as most seriously good children’s books do.

For example, beyond bringing the quirky Queen Victoria creating an underpants trend trivia to our attention, the book doesn’t include enough historical matter to warrant inclusion on educational reading lists. Nor does it include story elements exciting or out-of-the-box enough to hook kids into reading it (or adults reading it to them) for free-time fun either.

Which kind of makes you wonder when—or rather, if—anyone’s reading it. Which in turn may explain why I hadn’t heard of this book, first published in 2010, until now. Which is why I think I’ll be sticking to re-reading French’s and Whatley’s back catalogue. Diary of a Wombat, anyone?

One thought on “Queen Victoria’s Underpants”