The recent CBCA shortlisted Book of the Year for Younger Readers is an impressive list, not least because of the strength of the books that are Notables but didn’t make the shortlist. Younger Readers is traditionally a category of the awards that receives an enormous number of entries and it is thrilling that the quality is so high this year.

Many of the shortlisted books are aimed at upper primary age children, which is the case most years, although The Cleo Stories: The Necklace and The Present by Libby Gleeson, illustrated by Freya Blackwood (Allen & Unwin) is for much younger readers. It is surprisingly difficult to find an outstanding junior novel. Books in series, for example, often cater for the seven to nine year-olds, and picture books and simple chapter books cater for even younger children. Libby Gleeson achieved the feat of creating an excellent junior novel years ago with the brilliant Hannah Plus One (which did become a series). In The Cleo Stories (for even younger readers than Hannah), she acknowledges the situations and feelings of a young girl, firstly when she wants to be like the other girls and then when she needs a present for her mother. The character of Cleo and her concerns reminds me of Anna Branford’s lovely Violet Mackerel – one of the titles in the series was a Notable book this year. Realism novels dominate the 2015 short list. Steven Herrick always does an authentic portrayal of relatable primary school kids and the groups they mix in. Bleakboy and Hunter Stand Out in the Rain (UQP), about a new boy who is bullied, works well in prose rather than the verse novel form he often uses. It also looks at environmental issues.

The Simple Things by Bill Condon (Allen & Unwin) is about a gentle, immature ten-year-old who has to stay with his formidable great-aunt, Lola. Lola reminds me of Kirsty Murray’s Aunty ‘Big’ in The Four Seasons of Lucy McKenzie. Ben in Two Wolves by Tristan Bancks (Random House) tries to deny the trauma in his life but is forced to confront the troubles caused by his parents and use his own initiative.

Figgy in the World by Tamsin Janu (Omnibus Books, Scholastic) is quite different from the other shortlisted books, being set in Ghana. Figgy’s grandmother is ill so Figgy is running away to the United States of America to buy medicine. It gives an excellent insight into another world at an appropriate level for primary-aged Australian children. 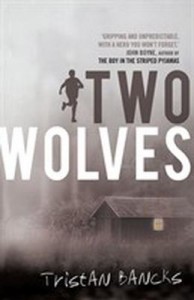 Some of the Notable standouts that missed out are Ophelia and the Marvellous Boy by Karen Foxlee, The Ratcatcher’s Daughter by Pamela Rushby, Paper Planes by Allayne L. Webster, The Crossing by Catherine Norton and Kelsey and the Quest of the Porcelain Doll by Rosanne Hawke.