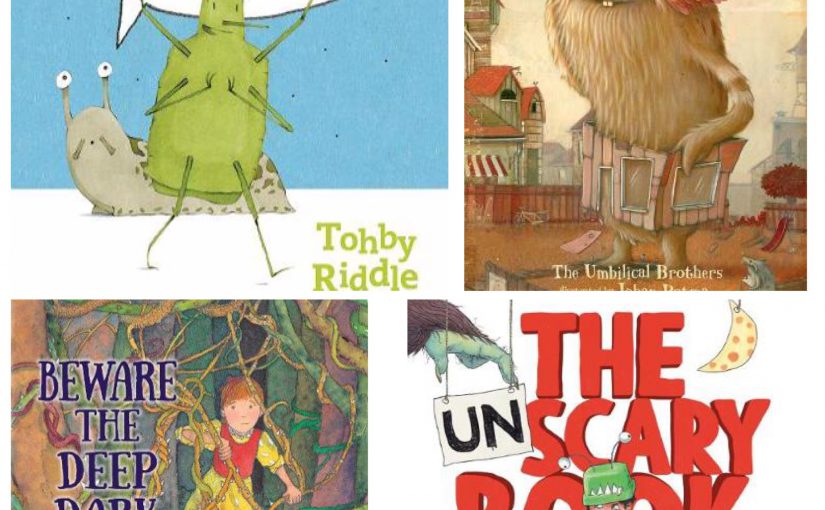 Children love a splash of spook, a gash of ghoul and a dash of danger, but only if it’s laced with humour and courage. If you’re looking for some creepy crawlies, menacing monsters and terrifying trolls to give you the shivers this Halloween, then check out these wild picture books… don’t worry, they’re not actually so scary. A Monster in my House is written by the internationally acclaimed comedians The Umbilical Brothers, so you know you’re in for an amusing feast rather than a nightmarish one. Their undeniably popular wit is clear with their multi-layered twists that pleasingly surprise. The first-person narration warns of the danger associated with having a different monster in each room of the house. However, upon inspecting the images, Berlin artist Johan Potma has done a brilliant job to capture a mix of the classic, old-style horror with a beautiful warmth and humour that just does the opposite of chilling. He neatly infuses newspaper collage with pencil sketching and oil paint in subdued browns, reds and greens with the loopiest of monster characters you’ve ever seen. And take note of the little mouse in each spread… it holds some very important clues! In a charming rhyming text, the suspense is thrilling, leading us to a conclusion that is totally unexpected.

A Monster in my House is a delightfully playful romp abound with some pretty cool characters that will simply warm your soul. With a nod to the legendary We’re Going a Bear Hunt comes this exasperatingly satisfying Beware the Deep Dark Forest by Sue Whiting and Annie White. Sure, there are creepy bits, with carnivorous plants and venomous snakes and all. But that doesn’t stop Rosie from being the heroine in this suspenseful adventure tale. Braving it out through the sublimely detailed and juicy scenes, the young girl sets off to rescue her pup Tinky through terrifying obstacles, including a bristly wolf, a deep ravine, and an enormous hairy-bellied, muddy troll. But rather than shy away and run like the children did with a certain shiny-eyed, wet-nosed Bear in another story, Rosie stands tall and defiant proving her saviour qualities. Then she can squelch back through the deep and dark and muddy forest back home.

Beware the Deep Dark Forest captures just the right amount of creepiness with the rewarding inclusion of excitement and adventure and a strong female character determined to get her hands dirty and tackle the tough stuff. This is how you face your fears for children from age four. Following the long-lasting success of The Wrong Book, Nick Bland has come out with this latest cracker, The Unscary Book. It follows a boy, Nicholas Ickle, suitably costumed in an alien / skeleton attire, attempting to introduce us to his ‘scary’ book. So, prepare to be frightened! However, each page turn sends readers into fits of giggles rather than a state of alarm. Poor Nicholas is more terrified at the nice-ness and bright-ness of what is revealed behind all his pre-prepared props. ‘But ice-cream isn’t scary, it’s delicious!’, he shouts. ‘I’m trying to scare people, not make them hungry!’. The brilliantly colourful and energetic (non-scary) book continues to amuse our young audience as Nicholas becomes more frustrated with things that are NOT spooky, terrifying, frightening, or horrifying. And just when you think he’s finally won, well, you’ll just have to read it to find out!

The Unscary Book has plenty of animation and visuals to pore over, as well as fantastic language and comprehension elements to explore. Comedic bliss that all went wrong in just the right way. No preschooler will un-love this one! Not so much scary, but more like stinky! Which is actually helpful for scaring those unwanted pests away. Tohby Riddle has got this story spot-on with his knack for harnessing the powers of philosophy with humour and an understanding of human complexities – although in the form of bugs and critters. Here Comes Stinkbug! is completely captivating with its brilliantly simplistic plot and dry wit about the unpleasantness of a smelly Stinkbug. None of the other crawlies want to be around Stinkbug because, well, he stinks. They try to raise the matter with him, but that makes him worse. Until he tries to charm the others with a lot of effort. However, it seems Stinkbug has attracted the wrong sort… Maybe it’s best to just be yourself.

The aptly hued garden tones and textures combined with a mixture of typed narrative and handwritten speech bubbles elicit a nature that is both endearingly casual and candid. Here Comes Stinkbug! empowers readers to consider embracing who you are, playing to your strengths and being wary of those who might take advantage of you. Children from age four will find this book utterly and proposterously reeking with the sweetest kind of comedy, bugging their parents for more.