‘The Silver Brumby lingers in me like a memory of a best childhood holiday… the writing so lovingly drawn it was as if I could hear the trumpet call of the wild horses, and breathe in their joy to be free’
– GILLIAN MEARS
Critically acclaimed novelist and winner of the 2012 Prime Minister’s Literary Award

‘I remember loving The Silver Brumby books as a child. Like every girl in her early teens, I had a thing for horses and these books were particularly special because they were written from the horses’ perspective’
– MEM FOX, AM
Legendary children’s writer and author of Possum Magic

‘The Silver Brumby books were a magical part of my most formative years. I lost myself in them, adored the stories, sobbed my heart out and will never forget the magic and sheer wonderful storytelling of Elyne Mitchell. In a way, I knew Australia long before I ever came here through the wild countryside described so gloriously by Elyne.’
– CATHY KELLY
Bestselling Irish women’s fiction author 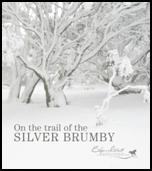 HarperCollinsPublishers is proud to announce that 2013 marks 100 years since The Silver Brumby creator Elyne Mitchell’s birth. Elyne’s books captured the hearts and imaginations of generations of young people around the world, and the centenary is an opportunity to celebrate their contribution to Australia’s literary and cultural heritage and the nostalgia that endures around the land of Thowra and his mother Bel Bel.

Celebrations will begin in October 2012 with the simultaneous release of three very special commemorative books:

On the Trail of the Silver Brumby

A beautifully illustrated and stunningly photographed anthology of the best of Elyne Mitchell’s writing about the Australian high country: the Silver Brumby heartland.

Elyne Mitchell’s daughter Honor Auchinleck tells what it was like to grow up with a famous and highly creative mother who created the classic Australian children’s books, the Silver Brumby series.

This special edition contains the first four titles in the Silver Brumby series plus a specially commissioned biography of Elyne and family photographs.

About the authors
Honor Auchinleck is the daughter of Elyne Mitchell. Inspired from the outset by her parents, who were prolific travellers and keen storytellers, Honor has led a peripatetic life, having have moved home nineteen times; living, working and travelling in five different countries on three continents. In thirty-four years overseas, Honor never lost touch with her roots, returning increasingly frequently in recent years to assemble Elyne’s archive.

Honor has worked as a freelance features writer and photographer on expatriate newspapers and for two years was a member of a panel of judges for the Commonwealth Essay competition in London.  She is now living in Melbourne.

Elyne Mitchell OAM (1913 – 2002) is an Australian author who is most noted for her children’s books The Silver Brumby series, which she originally wrote for her children. Set in the Snowy Mountains, these books follow the life of pale palomino brumby Thowra. Although the Silver Brumby books are her most famous, she wrote several others, mainly about horses. Passionate about the dramatic landscapes of the Australian Alps, her books convey the beauty and savagery of that area with a remarkable lyricism.