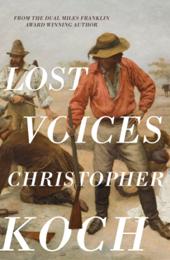 Dramatic, insightful and evocative, Lost Voices confirms Koch as one of our most significant and compelling novelists

Twice winner of the Miles Franklin Award and an Officer of the Order of Australia for his contribution to Australian literature, Christopher Koch returns with a remarkable new novel of gripping narrative power.

Eighteen-year-old Hugh Dixon believes that he can save his father from ruin if he asks his mysteriously estranged great-uncle Walter — a wealthy lawyer who lives alone in a farmhouse passed down through the family — for help. As he is drawn into Walter’s rarefied world, Hugh discovers that both his uncle and the farmhouse are links to a notorious episode in the mid-nineteenth century. Walter’s father, Martin, had been in the house when it was raided by the infamous bushranger Liam Dalton. But Dalton was no mere brigand: he belonged to an outlaw utopian community, run by the charismatic gentleman escapee, Lucas Wilson. Martin’s experiences in the hidden community of visionaries form the subject of Walter’s obsession: one which haunts his present and keeps the past tantalisingly close.

As Walter encourages Hugh’s ambition to become an artist, life’s patterns repeat themselves from one generation to another becoming eerily apparent. Christopher Koch was born and educated in Tasmania but has spent most of his life in Sydney. He has been a full-time writer since 1972, winning international praise and a number of awards for his novels. One of his novels, The Year of Living Dangerously, was made into a film by Peter Weir. Koch has twice won the Miles Franklin Award for fiction: for The Doubleman andHighways to a War. In 1995 he was made an Officer of the Order of Australia for his contribution to Australian literature.