A Memoir from the author of ‘Our Woman in Kabul’ 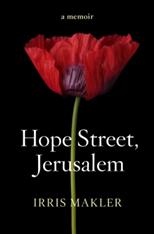 Moving to a foreign city is always fraught, but never more so than in a place where the daily expression of love and hate can turn a simple choice of a romantic table by the window into a life or death decision.

“After years of considering myself incredibly fortunate, almost to the point of superstition, I was hit in the face with a rock during riots in the Old City of Jerusalem in 2009. My jaw was broken in three places and was wired shut for 6 weeks. Israelis were concerned – ‘Oh, no you can’t eat!’ Far worse for me was that, ‘Oh no, I can’t talk!”

Both a love story and bittersweet tribute to her beloved adopted city of Jerusalem, Irris Makler shines a hopeful light on a part of the world where the news reports often makes it seem impossibly dark. From juggling the danger and unpredictability of her work as a roving foreign correspondent, covering everything from Palestinian suicide attacks to Israeli incursions into the West Bank, to falling in love with a handsome and charming young Israeli, and gaining a mischievous puppy along the way, she allows us an intimate glimpse into a passionate, vibrant and fascinating world.

Irris Makler is an award-winning Australian foreign correspondent based in the Middle East for the past nine years. She files stories from Jerusalem, Baghdad and Cairo for news services around the world. Previously based in Moscow and London, she reported extensively from Afghanistan as one of the first journalists on the scene after 9/11 and wrote about these experiences in the highly acclaimed ‘Our Woman in Kabul’. Irris has always been interested in the stories women can tell and what affects their day-to-day lives. She lives in Ein Kerem, a historic village in the Judean hills outside Jerusalem.