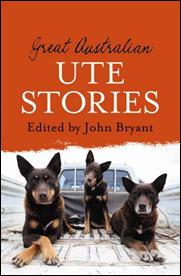 We invented it. We love it. The ute is a national icon, alongside the pie and sauce. It is the very symbol of our resourceful ingenuity. No matter what you drive, this collection of 80 ute yarns will charm you with its laconic humour and Aussie warmth. Written by everyday Australians in praise of our love affair with the ute, this book unashamedly celebrates the joy of circle work, the improbable allure of feral utes and the ute’s perennial ability to save the day, win the girl and excite the dog. A bumper collection of hilarious and heartwarming Australian stories collected by ute-aficionado John Bryant.

This book also publishes, for the first time, the winner of John’s Number 1 Ute Legend competition.www.utelegend.com

John Bryant’s formal love affair with utes goes back to 1994 when he started Bluey’s Ute World, the country’s first ute-gear store. John’s first book of ute yarns, Real Aussies Drive Utes, was published in 1999, with a second book, Real Aussies Drive Utes II, released in 2001. He has written about utes and their quirky owners in numerous publications, including R.M. Williams OUTBACK magazine. When he’s not mucking about in his own ute, he indulges his other obsession — building medieval towers.