Today I had the privilege of attending the national launch of the National Year of Reading 2012, held at the National Library of Australia, Canberra.

The National Library was abuzz with superstars from the literary world – but the NLA wasn’t the only literary hot spot. All around the country, at libraries and halls and schools and centres, a mass celebration took place – and all for an amazing cause. 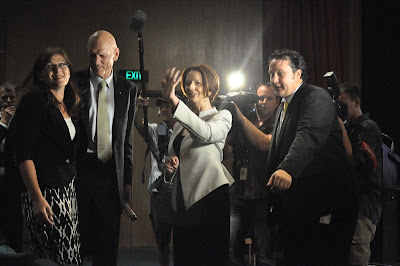 After Julia’s inspiring speech, we heard from William McInnes and next it was the fabulous Boori Monty Pryor – children’s author, NYR12 ambassador and Children’s Laureate – who brought in a classroom of school kids. Monty knocked their socks off with a resounding tale about didgeridoo spit – and had everyone in serious stitches.

The event was also peppered with some wonderful short films and snippets, including a piece from co-Children’s Laureate Alison Lester. We also heard about the NYR12’s aims, upcoming events and initiatives, and the glorious news that Disney have paired with NYR12’s Reading Hour (25 August). 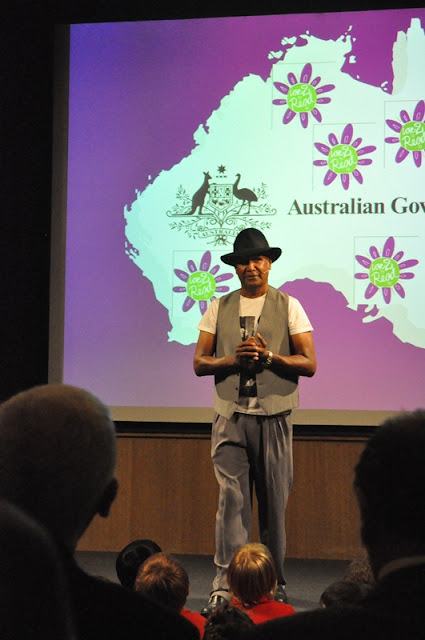 We also heard from Education Minister Peter Garrett, who asked the kids to make the NYR12’s official signing – LOVE 2 READ – with their hands.

Afterwards, there was time to meet up with new and old friends, nibble some delicious sandwiches and have a cup of tea. It was fabulous to meet so many amazing people, to finally meet the amazing Monty and to have a cuddle with William McInnes. But most of all, it was a thrill to see the passion and support that is driving this phenomenal national initiative.

This is a very exciting year ahead – make sure you check out the NYR12 website for more on how you can get involved!