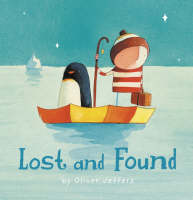 A former work colleague has a drawing above her desk drawn for her by the child of a family friend. Entitled My Family And A Sausage (MFAAS) it is, as the name suggests, a stick-figure picture of the child’s parents, siblings, pet dog, and a, er, sausage.

We can’t pretend to understand children’s logic, but our adult estimation (because we feel the need to make sense of things rather than accept them for what they are, fun, random, and illogical though they may be) is that they drew too many roundish stick figures. Instead of scrapping the artwork, they incorporated the error: why wouldn’t a sausage appear in a family portrait?

It’s MFAAS thinking that’s required to create children’s books that capture our imaginations and our hearts. Oliver Jeffers has that in spades (that’s a compliment, by the way). Although I don’t have kids and don’t know or hang out with many of them either, I desperately want to buy and give away copies of his books to kids and then secretly buy copies for myself. 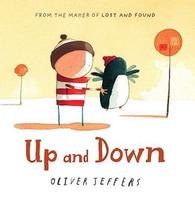 You’ve seen them, right? The ones with the penguins so cute you want to squeeze them. Like Lost and Found and Up and Down. While my stick figures (in fact, any attempt I make at art) are wonky and more than a little lame, Jeffers takes stick figures and makes them so cute they couldn’t not be published. Sigh. He can write. He can draw. He’s funny. And he’s retained that brilliant, upside-down, child-like way of looking at the world. Isn’t that exactly what every artist would love to do and be?

Thankfully Jeffers is sharing his skills. He dropped by The Guardian’s website the other day to give some advice on How To Draw A Penguin. With circles and a dab of colour, he makes it seem easy. Oh, and he incorporates sausages into his drawing. Clearly sausages are the key!