Nette Hilton is a much-loved and rather wickedly humorous creator of books for children and young adults. She lives in northern NSW. Her titles span the award-winning The Web, to picture books A Proper Little Lady, The Smallest Bilby and the Easter Tale and Little Platypus; junior novels Sprite Downberry, Star of the Show, Adventures of a Late-Night Swearer and the excellent, but disappointingly out-of-print, YA novel The Innocents.

Her latest book is The First Adventures of Princess Peony, illustrated by Lucinda Gifford and published by Walker Books Australia. Of all Nette’s books it is most like the evergreen A Proper Little Lady, illustrated by Cathy Wilcox. It is a little Dr Seuss-ish in size and style and could also be read alongside Babette Cole’s Princess Smartypants tales.

The First Adventures of Princess Peony is sub-titled ‘In which she could meet a bear. But doesn’t. But she still could.’ This adds intrigue to the tale because bears don’t feature at all as the story is set up. Instead we get to know the ‘dear little girl called Peony’ but it is Peony who is telling us that she is a ‘dear little’ girl. She is actually very bossy and one of her favourite things is ‘being obeyed!’. Peony is an unreliable narrator, full of personality, who addresses the reader at times.

Lucinda Gifford’s lively black, grey, white and pink illustrations tell another side to the story as well. Princess Peony tells us that she lives in a castle with her dragon Totts but the pictures show something else. She says that princesses ‘never lose their temper when things go wrong’ but the pictures show her looking far from serene.

She has trouble with Prince Morgan the Troll who is always interrupting, pats the Dragon under its wings and is building a bear trap. This is the catalyst for Princess Peony’s possible encounter with a bear. The illustrations again add to the humour with expressive eyes and partly hidden bears peering from the hedge. A chook also has a lively cameo.

This is a book to read multiple times. It is so engaging children will want to rush through it the first time but it is also a book to savour. The plotting, characterisation and humour are superb. It is a wonderful place for young readers to share and develop imagination and revel in pretend-play and role-play alongside Princess Peony. The First Adventures of Princess Peony is fun and exciting and has a most satisfying story arc. It is a triumph. 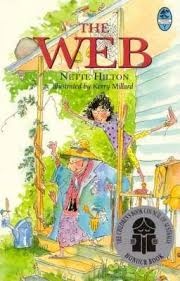 One thought on “Meet Princess Peony this Christmas”