Imagination – the external source of ideas and creative verve or simply an astonishing faculty for storing all that happens to you and all that you wish could happen to you. Either way, when a picture book encapsulates this wonderful cache of wishes and experiences, the sky is the limit as to what you can do and where you can go. Young children instinctively know this and apparently, so too do gecko-sque styled sketches…

I Want to Be in A Book by Narelle Oliver

This picture book, the last title by Narelle Oliver, is a kind of mecca to imagination and creation. It epitomises the need to belong, the joy of purpose and the delicate process of turning dreams into magical reality. And it is all done through the eyes and heart of a mere idea…a sketch, but a sketch with a name, Cecil.

Cecil regards himself as a little bit special because even though he has yet to evolve with colour and scenery into a shiny glossy new book, he has been pinned up, which gives him time to imagine and hope and dream. Cecil’s desire is simple; he yearns to be in a book. He reasons that being in a book allows him to be anyone, anywhere, in any story.

Eventually, dreaming of his book is not enough and Cecil busts out of his notebook prison into…a real book. However, you have to be careful what you wish for and Cecil’s first real book experience results in near annihilation.

But Cecil’s papery resolution and determination has a high GSM; his dreams cannot be easily broken and eventually he lands in the ideal environment for making Cecil-book Magic.

Despite his flimsy appearance, Cecil helps young readers appreciate just what ‘talented and extraordinary creatures’ they can be. He is daring, optimistic and tenacious. He is also patient and a model of success on which youngsters can hang their affections – because he is also super cute and beguiling.

Oliver created Cecil’s environment using collage, photography, candy-coloured sketches, her trademark lino-cuts and real life objects. She created Cecil from her heart, distilling nearly every creator’s desire to share a bit of themselves and their Cecil-type imaginations with the world in his fluttering, papery heart.

I Want to Be in a Book is so much more than just a magical story of one little fellow’s dream come true. It’s a glimpse of the unique creative process that is the birth of a picture book. It’s one of those never ending stories, a perpetual leap into the astounding abyss of hope and desire. It is an exemplary legacy to a great author and artist and a reminder to us all to keep taking those leaps and living the adventure of life no matter how foreboding it may be appear. Cecil exists to see his dream come true. I urge you to live it with him to realise Narelle’s dream, too.

Beautiful for four-year-olds and above. 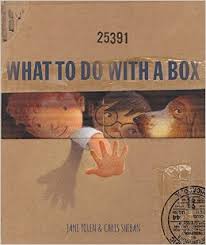 My daughter’s best friend once proclaimed that, ‘They could put us in a box and we’d still find something to play.’ Profound words for nine-year-olds yet, truer words were never spoken. A box is a rather humble thing but for kids and Jane Yolen, it ‘is a strange device’ worthy of the greatest attention.

This picture book celebrates the cardboard box in a way kids celebrate the popping of bubble wrap; absolutely and unreservedly. Not only can you open a box and climb inside, you can read, dream, explore, travel, solve mysteries, paint, drive, sail and fly a box so that it’s not just a box anymore but  a marvellous vehicle for realising dreams and going places.

Boxes can be secretive and private. More often, their specialness is best exploited when shared. Whatever they become in the eyes of a child, it’s their supreme simplicity that renders them such brilliant palettes for suggestion, which Yolen mimics with her simple rhythmic verse and Sheban reinforces with his muted, cardboard-coloured illustrations. Nothing gets in the way of the enjoyment of the box yet everything complements it 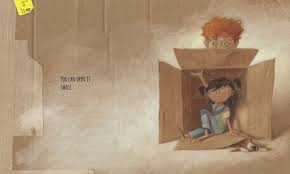 What to Do With a Box is a question you’ll seldom hear a small child ask but it is a picture book you will want to share with them. You’ll be making regular visits to your recycling centre to stock up on this imaginative toy after reading this picture book.