It’s an exciting literary week in Sydney, beginning with the announcement of the winners of the prestigious NSW Premier’s Literary Awards at the State Library.

I was honoured to judge overall Book of the Year, as well as the Patricia Wrightson children’s book category.

Taboo by Kim Scott won both the Indigenous Writers’ Prize as well as Book of the Year. This is the third consecutive year that an Aboriginal writer has won Book of the Year, with Leah Purcell winning with her play script, The Drover’s Wife last year and Bruce Pascoe with Dark Emu in 2016. 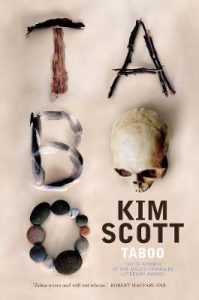 Taboo (Picador Australia) is an exceptional work: dense, skilfully composed and darkly lyrical with some mystical elements. It traces the reunion of people affected by a horrific past massacre in a Peace Park. Teenager Tilly is the daughter of deceased patriarch Jim. Her backstory is confronting,  intimating she has been treated like a dog. Twins Gerald and Gerrard may be her allies or threats. Multiple characters are introduced effectively and some unlikeable characters are rendered with affection and understanding.

Symbols of the curlew and other birds are powerful and I particularly appreciated the representation of words from the ‘ancient language’. They are alluded to but not shared on the page. Some can even animate objects. As Wilfred says, “Words, see. It’s language brings things properly alive. Got power of their own, words.” Another multi-awarded title is Bram Presser’s The Book of Dirt (Text Publishing). It won the UTS Glenda Adams Award for New Writing, the Christina Stead Prize for Fiction and the People’s Choice Award. It is a holocaust novel which reads like non-fiction and includes transcripts of the author’s letters and replies with black and white photos. Ideas about the Museum of the Extinct Race, The Story of The Book of Dirt and images of dirt as the clay Golem’s heart will endure. 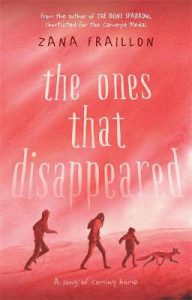 Golem figure, Riverman, is also a feature of Zana Fraillon’s Ethel Turner Prize Young Adult winning book, The Ones That Disappeared (Hachette Australia). This is a salutary warning about child trafficking and slavery in Australia and elsewhere told in sensory language, with a sometimes-magic realism style. (I reviewed it for the Weekend Australian here.)

The winner of the Kenneth Slessor Prize for Poetry is Argosy by Bella Li (Vagabond Press). This is an exciting combination of words and exquisite, thought- Congratulations to these and the other winners, as well as the creators of the shortlisted titles and thanks to the State Library of NSW, the coordinator of the awards.

Here is the link to the winning books and shortlists.

Link to my comments on the two youth shortlists