Isobelle Carmody — it’s a name synonymous with fantasy and science fiction for young people in Australia. She is a much respected and avidly read author. She first hit it big in 1987 with the publication of Obernewtyn, first book in the Obernewtyn Chronicles. And finally, at long last, that series will conclude with the publication of The Red Queen in November this year. Fans have been eagerly looking forward to this for a long time. Given the imminent publication, I thought now would be a good time to reflect on some of her writing.

The Obernewtyn Chonicles is the series she is best known for. Set in a post apocalyptic world, it follows the adventures of Elspeth Gordie, a girl with some extraordinary mental abilities. Elspeth’s adventures have spanned the course of six books so far…

The Sending (In the USA it was split into two books: The Sending and The Waking Dragon)

And book seven, The Red Queen, is not far off.

What many people don’t know is that Carmody wrote a prequel novelette a few years ago. “The Journey” was published in the excellent short story anthology Trust Me Too (and I’m not saying it’s excellent just because I’ve got a story in there too).

And while we’re on the subject of Carmody and anthologies… she also wrote the introduction to Trust Me, the precursor to Trust Me Too. Carmody has written lots of other books aside from the Obernewtyn Chonicles. Many of then are still in print. Some are out of print. And some are coming back in new editions.

In June this year a new edition of Scatterlings hit the shelves. It was originally published in 1991, and has been out of print for a while. It’s great to see is back!

Scatterlings is about a girl named Merlin, who wakes from an accident. She doesn’t know who she is. She doesn’t know where she is. The world around her is unrecognisable — divided up between the Citizen Gods who live in a domed city, numerous clans who are controlled by the citizen gods and, of course, the Scatterings… the clanspeople who have run away to rebel. Perhaps most disconcerting of all is the fact that Merlin hears voices in her head.

The lead character knows very little at the start of the story. So the novel is a journey of discovery for her. And we, as readers, get to go along with it. And WOW, what a journey it is — full of mystery, amazing revelations, intriguing characters and intricate relationships.

This is the second of Carmody’s older books to be rereleased for a new generation of readers by Ford Street Publishing. Greylands, originally published in 1997, returned to bookstore shelves in 2012 (see my review). It’s wonderful to see these Carmody classics coming back into print, as the stories are timeless and well worth being discovered by new readers. 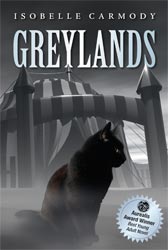 Of course, there are lots of other Isobelle Carmody books currently available. Perhaps now would be a good time to check them out…