MD of Boomerang Books, Clayton Wehner recently caught up with former international cricket umpire Darrell Hair to talk about his new book, entitled In the Best Interests of the Game.  The book is one of the 50 Books You Can’t Put Down in the 2011 Get Reading! campaign – buy a copy and get a free book.

Thank you very much for taking the time to speak with me, Darrell, and congratulations on the release of your new book, In the Best Interests of the Game. You controversially no-balled Muttiah Muralitharan seven times in three overs for a suspect action during a test match between Australia and Sri Lanka in Melbourne in 1995, and subsequently claimed that his action was ‘diabolical’ in your earlier autobiography.  Given that the incident contributed to you being sidelined from the elite umpiring panel by the ICC, do you regret calling Murali?

No I don’t regret it one bit. The fact that ICC several years later changed the regulations to permit bowlers to straighten their arms by 15 degrees only validated my decision.

Murali announced that he had ‘forgiven’ you when he last toured Australia – what were your feelings towards that statement and have you had any contact with him since?  If you were to meet him again, would the conversation be icy?

I guess the conversation would be “icy” as I still believe he broke the Laws as they were back then and continued to operate with immunity for the remainder of his career. He was in fact “too hot to handle” for other umpires. And what do I have to be forgiven for anyway?

Your new book deals specifically with another more recent controversy that you were involved in – the ball tampering incident involving the Pakistani cricket team at The Oval in 2006, which resulted in Pakistan refusing to return to the field of play and forfeiting the match. Again, this incident resulted in you being sidelined by the ICC and eventually being forced into retirement.  Clearly the Asian bloc countries hold much sway in international cricket – what can be done to change this power imbalance, one which seemingly threatens the traditions of the game of cricket? 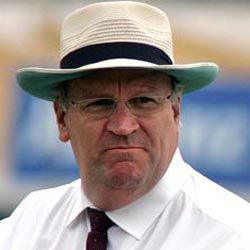 The “power” of the Asian Bloc is not the issue. If certain regions generate a large percentage of cricket’s revenue, that is fine but it doesn’t necessarily mean we get better governance of the game. Whilst I was sidelined due to the backlash from decisions made during the forfeiture of The Oval test match, I believe the reasons behind that were more poor governance and weak leadership by ICC Management rather than the power of the Asian Bloc. One must also understand that whilst India generates most of the game’s revenue, it is also responsible for the majority of illegal gambling on the game. Where are the ethics behind that?

We’ve seen a significant spill of Cricket Australia coaching staff and selectors in the past month and just last week the ICC Test team of the year was announced without a single Australian player.  What do you think about the current state of Australian cricket?  How has Cricket Australia become unstuck?

Australian cricket is generally in good shape – its just that the rest of the world has caught up with us and our proven methods.  I don’t believe it has come unstuck – there has just been some bewildering decisions on team selection and talent identification.

How does Australia reclaim its mantle as the top Test playing nation in the world?

Focus on the strengths – the Sheffield Shield for example is still the toughest first class competition in the world. Make certain it stays that way and remains the nursery for our future test players.

Twenty-20 cricket is getting really serious in Australia with the enhanced 8-team Big Bash competition starting this summer.  Your strong actions against suspect bowling actions and ball tampering suggest that you’re a traditionalist – what do you think about Twenty-20 cricket and how is its popularity impacting upon Test cricket?

I don’t believe it will ever impact on Test Cricket because the majority of players still want to represent their country at Test level. Sure, there are so-called specialist T20 players who seem to provide the power hitting and excitement that crowds want to come along and watch. In addition, the revenue stream created by T20 is something that cannot be underestimated. The game needs every spectator it can find and needs to keep them coming back. If they continue to watch and support T20 then that’s good for the game overall.

Now that you’re no longer jetsetting the world to officiate in cricket matches, I’m assuming that you have a little more time on your hands.  Are you still involved in cricket?  Do you get back to Mudgee or Mosman to umpire a local game from time to time?  Has your knee recovered sufficiently to allow you to have a trundle?

Yes, I am still involved and work for Cricket NSW as Executive Officer for the NSW Cricket Umpires Association, this job also entails acting as State Director of Umpiring and developing and coaching the next generation of 1st class umpires. I don’t umpire anymore even if my wonderful friends in Mudgee or Mosman ask me to. I prefer to say once retired, always retired. My knees are not in any state to be sending down any more vicious outswingers or bouncers.

Finally, a question that you’re likely to be asked regularly – who are the three best cricketers that you have had the pleasure to umpire?  And who is the best umpire on the international circuit?

Brian Lara, Shane Warne and Curtley Ambrose.  The best umpire on the international circuit was Peter Willey – unfortunately he refused to travel on a regular basis so his career was curtailed when ICC insisted on having their panel on the road so much.

Thanks for your time, Darrell, and best of luck with the sales of your book.