middle graders, Max Booth Future Sleuth, is a mind-bending, time-warping fun adventure about a boy and his robo-dog sidekick on a mission to uncover the truths about ‘ancient’ artefacts (Are the ‘80s really that ancient?!). The first book to send us looping back and forth between time zones is Tape Escape. Set in 2424, it is a comically suspenseful story that sees Max and Oscar in all sorts of strife, following the theft of the valuable, all-encompassing, legendary David Snowie-archived cassette tape from the hands of a maniacal musicology nutter. Certainly one to goggle over (or google if you’re under 20), for its fascinating reflections into technological history and advancements. 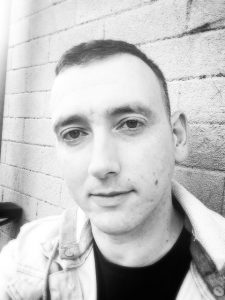 With a background in editing and writing educational texts, Cameron coolly strode his way into the world of children’s fiction. Thanks for sharing your writing journey and Max Booth insights with us, Cameron!

Firstly, please tell us a bit about your writing journey and how you came to write for children. What’s the best part of this career choice?

My writing journey has been very long and slow, but worth every twist and detour. Like a lot of writers, my journey started as a primary school kid. In my case it was writing rambling rhyming stories that weren’t nearly as clever as I thought they were at the time! I didn’t seriously think writing could be a career option until I enrolled in the RMIT Professional Writing and Editing course and found work as an editor out of that – in educational publishing. It took a few years, but I eventually used my contacts as an editor to leapfrog into writing educational texts. I’ve been happily doing that since 2008, but it wasn’t until 2016 that I made the much longed-for leap into mainstream trade publishing when Big Sky Publishing offered to take on the first Max Booth book.

For me, the best part of writing for kids is that it’s a licence to let your imagination run wild, and to revisit ideas that added extra levels of magic to your own childhood. I also get a lot of satisfaction from knowing that, in a small way, I’m part of an incredible community of writers, teachers, librarians and parents who are passionate about encouraging kids to develop a love for reading.

Congratulations on the releases of your latest books in the exciting Max Booth Future Sleuth series, Tape Escape and Selfie Search! What was the experience of writing this series like for you? What themes are at the heart of these stories?

Thank you! It was a very different experience writing each of them. I started the first book, Tape Escape, about four years ago as an attempt to branch out from educational writing. It was three years before the wonderful people at Big Sky offered to take it on, so I’d been living with it for quite a while. That was probably a good thing, because the story had time to find its feet and go through several drafts and workshops with my wonderful writing group. The second book, Selfie Search, was a very different experience – I’d pitched Max Booth as a potential series, and Big Sky wanted another book to follow it up fairly quickly. I’d already written four or five mini-synopses for future titles, so much of the plot was already in place. And obviously, the characters and world of the story had already been set up in Tape Escape, so it wasn’t too hard to put it together in the space of a few months.

The themes of the books include technology, family, friendship and historical discovery – a strange mix but somehow they seem to work together!

I loved the whirlwind time warp of recollecting the past and imagining the future. Where did the inspiration for these books come from? Were you a hard core sci-fi / fantasy fan as a child? Is there something about time travel that steered you towards this angle? How much research went into plotting accurate facts in technological history?

The initial inspiration came from a visit to Naples and Pompeii, where I encountered all sorts of objects that had survived the devastating eruption nearly 2000 years ago – mostly everyday, domestic items like crockery and hair combs. My fascination for these objects started me wondering whether similarly mundane objects from our own lives would be so interesting to future generations. All I needed was a character with that very fascination (hello Max!) and I was off and running.

Oddly enough, I wasn’t a huge sci-fi or fantasy fan as a kid, apart from Star Wars and Monkey Magic (if they count!), and a few one-off books. But over the last few years I’ve found that speculating about the shape of the world over the coming centuries seems to unleash lots of sparks for story ideas.

In terms of research, the main thing I need to be sure of is that the dates line up correctly for the 20th and 21st century objects Max investigates in each book. I also need to scratch a little deeper for some of the objects because each book ends with a factual spread about the main item Max investigates, giving basic information about its history and how it works.

How have you found the feedback from your readers so far? What have they loved the most about Max Booth? Is this what you had hoped to achieve?

It’s been very encouraging so far. Most importantly for me, they’ve enjoyed the humour, and have liked Max’s robo-dog, Oscar. I’ve also had feedback that readers have liked the future gadgetry, and that parents have found the stories a useful springboard for conversations with their kids about the technologies they grew up with. That’s really pleasing too.

Dave Atze’s illustrations are humorous, energetic and befittingly shrewd. What was it like collaborating with him? Were there any surprises along the way? 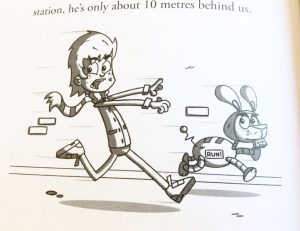 You’ve really summed up Dave’s work perfectly. It’s such a treat to work with an artist who has such an intuitive feel for characters and sci-fi settings. His illustrations are really funny too. In terms of the collaboration, I’d included lots of suggestions in the manuscripts. Between Dave, the publisher and myself, we whittled them down to the most important ones, and Dave pretty much took the reigns from there. He nailed the ideas really quickly and we really didn’t need to do a lot of to-and-fro.

The biggest surprise for me was seeing these characters come to life so closely to how I’d imagined them. There was definitely some kind of telepathy going on!

What is your favourite technological device from the past, and what do you think it might be in the future?

My favourite device from the past would have to be my Nintendo Game and Watch game (Popeye!) from the 80s. For the uninitiated, Game and Watch was a series of simple hand-held LED games that were seriously addictive, and are now quite collectible.

My favourite future device will be a scalp-massaging bike helmet – can someone please invent one soon?

What would be your dream time zone for writing be?

It’s not very romantic, but I sometimes wish it was the early 90s again – where we had the benefit of decent word processors without the distraction of the internet! Failing that, an attic in a French castle in the 1880s would be okay too – as long as I can bring a heater and a massage chair.

What projects are you currently working on? What can your fans expect to see from you in the ‘not-too-distant’ future?

I’m currently working hard on the third Max Booth book, and having a lot of fun with it. I won’t say too much about the plot, except that in this one, it’s a very low-tech item that Max is investigating.

There’s also an almost-finished YA novel that I’ll get back to when Max is off the desk, and I’ve recently started plotting a book for adults – I think it’s a crime story, but who knows, it’ll probably end up morphing into sci-fi!

Where can we learn more about you and your books?

Until Andrew Morton writes the biography, the best place to start is probably my website: www.cameronemacintosh.com.au. I’m also on Facebook as ‘Cameron Macintosh, author’ and Twitter @CamMaci99. The Max Booth books are available at www.bigskypublising.com.au.

Thanks so much, Cameron, for discussing your writing journey, past, present and future! 👦🏼 🐶 📼

It’s been a lot of fun, Romi. Thanks a billion for having me!