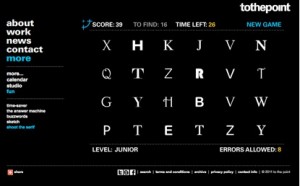 The interwebs is a veritable treasure trove of incredible trivia and entertaining oddities. This blog I thought I’d share two such oddities I’ve discovered and loved in recent days.

I Shot The Serif

Clean, crisp, simple, sharp, the site is well designed and well executed. As a site dedicated to shooting serifs, it has its typography down pat. I love the blue crosshairs—clearly there’s a previously unknown inner hunter in me. And the site is a memorable entrée to their communication design work.

You can play it on their website or download the free iPhone app (and yes, I’ve done both). You select your skill level (I went Junior) and have to click on (AKA ‘shoot’) the serif letters that appear on your screen (a bit like the modern version of a duck-themed shooting gallery game) within a certain timeframe.

I back myself on being able to easily identify my serifs and san serifs, but this game’s trickier than it looks. More than a few times I hesitated, hovering the blue crosshairs over letters as I wondered if they were indeed serif.

Suffice to say, this game has occupied much time on public transport and a surprising amount of brainpower too. Double thumbs up.

Want to be a literary giant? Kill your characters (infographic)

Everyone’s after the secret formula for writing the best-selling, award-winning novel. It’s elusive and not as join-the-dots simple as we’d all like to believe. But self-proclaimed ‘slow journalism’ magazine Delayed Gratification (which itself warrants a lot closer inspection—I’ve ordered the latest copy of this quarterly journal now) has mapped out some of the key themes in the 2011 Man Booker Prize longlist.

Reminiscent of a Tube map, it’s colour-coded, streamlined, and mesmerising. I could trace my finger to follow along the lines for hours, but that would be odd and it would leave smudge marks on my screen, which I loathe. Either way, I love this infographic-meets-art and am plotting to get a version for my apartment … As a side note, and as a nice segue to the serif-shooting app, the most popular plotline is murder.