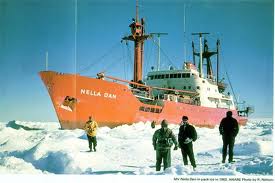 When I was about thirteen, the Antarctic supply vessel, MS Nella Dan ran aground on the windy and mysterious mountain in the Southern Ocean – Macquarie Island.

Everyone was evacuated quickly and without injury, thanks to the organised crew and the LARC drivers (amphibious trucks). Staff at Macquarie Island worked hard to give everyone hot showers and meals and a warm place to sleep. The base was packed to bursting and no one knew what was going to happen. Some of the crew and passengers were sent back to Hobart on another supply vessel, but they were certain they would see Nella Dan again by Christmas. 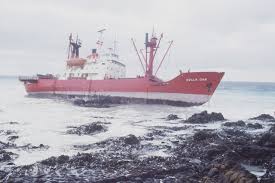 Over the next 21 days people fought and argued and had their opinions about what the future of Nella Dan should be. There were three insurance companies involved, which made things complicated and drawn out. Australian polar explorer, Phillip Law raised a lot of money to try and get Nella Dan back to Australia, and many were sure she would be towed ‘home’. But that was not to be. It was decided by the powers that be that Nella Dan should be scuttled in deep water off Macquarie Island.

The Captain and Bosun and some other officers stayed on Nella Dan, without heating or power. They would not leave her. They had lunch together after they were told she was going to be sunk, and afterwards they threw their used plates down the shaft. They said that the sound of the plates breaking was devastating. While writing this book, I often thought of those Danes who stayed with their ship. How their hearts must have ached as they watched her being put down. And then they had to injure a crowded voyage to Hobart on the tug, Lady Lorain. They got little sleep.

For many, Nella had been home for a long time. She was home. Even people who only sailed on her once talk about her as if she was special. She old fashioned, small and comfortable. She had a grace and an air about her. She always felt safe even in huge swells, even though often many passengers were very sea sick on board.

Writing this book has brought back a lot of memories for me, and I love Nella Dan more now than I did as a child. But some of the mysteries are still that – mysteries. I will never know everything about her last days.

I have read so many reports and talked to a lot of people. I have travelled to Macquarie Island, to Antarctica, to Denmark. It’s been quite a journey. Without Nella Dan, I would never have travelled to such wonderful places, or met so many incredible people. I feel very blessed.