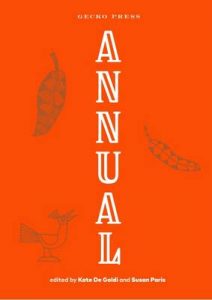 Exceptional children’s gift books for Christmas this year include Annual, edited by Kate De Goldi and Susan Paris (Gecko Press). It’s a treasure book in the vein of an old-style yearly annual, here packaged in the highest quality hardback form as a sumptuous possible Christmas present and absorbing holiday read.

The editors have excelled in their commissioned works, which range from short stories to non-fiction, poems, comics, art pieces, a song with sheet music included (Always on Your Phone) and activities such as a board game called Naked Grandmother and This is not a bottle – instructions on how to make a minaret, a spaceship or a hound with a bottle.

Contributors include Bernard Beckett, Barbara Else and Steve Braunias who has written a satire about various celebrities turning up to work at your house. Lorde and Taylor Swift turn up to wash the dishes but not much work actually takes place. Classic Nursery Rhymes (Bloomsbury) is for younger children and showcases exquisite artwork by Dorothy M. Wheeler, who illustrated Enid Blyton’s books. Each nursery rhyme is generously illustrated with a full-page colour picture inside an elaborately sketched black and white border, which spills over to surround the printed rhyme on the opposite page.

There are too many favourite rhymes to name but they include Hickory, Dickory Dock and Jack and Jill as well as lesser-known gems such as A Frog He Would A-Wooing Go and Cock-A-Doodle-Doo. Little Jack Horner is ideal to read for Christmas.

The sheet music is provided for a number of the rhymes such as Polly Put the Kettle On and Baa, Baa! Black Sheep.

Studies show that children who know nursery rhymes have a higher success rate in early literacy. Mem Fox has also been sharing this belief: ‘If a borrowed story book or nursery-rhyme book becomes favourite, do your utmost to purchase it for your child. Children who have lived in book-filled homes prior to going to school are known to be scholastically advantaged for the rest of their lives. And children who have memorised eight nursery rhymes by the age of three, so I have been told, are always the best readers by the age of eight.’ (quote from Mem Fox’s website) There is a foreword in Classic Nursery Rhymes by Chris Riddell, who has also been busy illustrating a reissue of Neil Gaiman’s interpretation of a Norse myth, Odd and the Frost Giants (Bloomsbury). This is a very classy publication, extravagantly produced with illustrations throughout, touches of silver ink and cut-away icicles on the front cover. It is sophisticated, creative writing for older primary or gifted younger readers.

It is always worth exposing young readers to folktales, whether in original or reinterpreted form. Here a Viking boy with the unusual name of Odd suffers a terrible injury to his foot and encounters beasts in the woods that are actually Norse gods. As well as the often-argumentative male gods we also meet that most lovely and capable goddess, Freya.

One thought on “Glorious Gift Books”