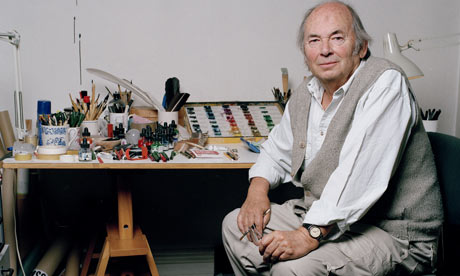 Quentin Saxby Blake was born in Sidcup, Kent, in 1932. His first published drawing was for the satirical magazine Punch, at the tender age of 16. Studying English Literature, he went on to complete a post graduate teaching diploma before studying at the Chelsea School of Art, and eventually taught at the Royal College of Art for over twenty years.

Blake has illustrated more than 300 children’s books, some his own, and some for other authors like Roald Dahl, Russell Hoban, Elizabeth Bowen, Jane Aiken, Michael Rose, John Yeoman and Dr Seuss. His very first picture book was A Drink of Water by John Yeoman in 1960.

Making his living as an illustrator, lifelong, he has also been a BBC presenter on a children’s story telling programme – Jackanory – where he told stories and illustrated them live.

In 1993, Blake was commissioned to illustrate five Christmas stamps for Royal Mail, featuring scenes from Charles Dickens’ A Christmas Carol. In recent years, he has worked as Curator for such esteemed organisations as the National Gallery, the British Library and the Musée du Petit Palais in Paris.

Illustrating David Walliam’s debut book – The Boy in the Dress – in 2009, as well as Walliam’s most recent book is Mr Stink.

Books both written and illustrated by Quentin Blake include:

Mrs Armitage, Queen of the Road

Quentin Blake’s work has won numerous awards including the Kate Greenaway Medal, the Whitbread Award, the Emil/Kurt Maschler Award, the international Bologna Ragazzi Prize and the Hans Christian Andersen Award for Illustration in 2002. In 1999, he was appointed the first ever Children’s Laureate, and his book Laureate’s Progress recorded his many activities during this two-year tenure.

This formidable talent loves drawing things that move, although he says cars can be difficult unless they are a bit ‘broken down’. He loves to interpret emotion in his characters by imagining the very same things happening to him, though this does cause him to pull faces as he draws. He never married and has no kids.