That ebook data records who does and doesn’t get through books isn’t surprising. That this data’s only just being tabled now is.

The Guardian has just reported that Kobo announced that Donna Tartt’s The Goldfinch—the bestselling book that won that a Pulitzer in 2014—was completed by less than half the people in Britain who bought its electronic iteration.

This information offers us a glimpse into what we buy due to timeliness or hype and with good intentions, but then for whatever reason never quite read. I’d guesstimate we’ve all been there and done that a bunch of times.

The Guardian hypothesises the some 800 pages of The Goldfinch might have had something to do with whatever the electronic equivalent is of putting a book down and never picking it back up. It seems intimidating or time-consuming or both.

I’d say The Guardian hypothesised right. At least, they did in my case. I bought a physical copy of The Goldfinch when it first came out. But I’ve been so time and brain-space poor that when my hand hovers over the books as I try to decide which one to pluck from the pile, those 800 pages ruled—and indefinitely continue to rule—The Goldfinch out.

The thing is, until now, publishers didn’t know this kind of information. My physical The Goldfinch sale would be recorded as just that, a sale, and the publisher would be none the wiser about the thing that’s most important: whether readers actually read the book.

I’m not saying 800-word books shouldn’t be written. Quite the contrary. Especially when it’s at the hands of writers as exquisitely talented as Tartt (The Secret History simultaneously remains one of my all-time favourite books and one so deftly crafted it actually pains me).

I’m saying we should know more about which books are read and how. 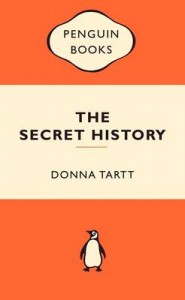 Of course, in the hands of money-wringing, non-book-loving business minds, this information could be used for evil. I’d like to think, though, that it might mean the books commissioned and written or written and picked up get even better than they already are.

I think it also might level the playing field a little. My guess is that capital ‘L’ Literature titles fall among the least-finished, while the pulp fiction tales, which are traditionally looked down on by the publishing sector, might be grafted a tiny bit more (albeit grudging) respect.

(Interestingly, one of the most-finished books The Guardian/Kobo mention was actually self-published. Even more interestingly, Gone Girl, which was one of bestsellers across all booksellers’ formats and which seemed to be the kind of tale that captivated avid and occasional readers alike, wasn’t among Kobo’s most finished.)

Or it might—gasp—encourage us to think how we deliver content in order to encourage greater audience engagement and, ultimately, satisfaction. The book is a container for content. It always has been and always will be. To suggest its format needs reworking is akin to blasphemy.

I’m not suggesting throwing the book out. More just if we can find additional ways to tell stories. Serial podcast, about which I promised I wouldn’t write and which I’ve now mentioned twice, inspires us to think laterally about storytelling.

At its core, it’s a gripping tale grippingly told across a radio story meted across 12 weeks and via tenterhook-inducing segments. Around it are organic transmedia parts—court transcripts, images, legalese, interviews, blogs, and more—complementing and enhancing the audience experience.

Of course, this doesn’t mean every book needs to include audio and video. It doesn’t mean publishers are going to be able to isolate the elements that will, combined, result in the perfect book-buying and book-reading conditions, and that all writers will be forced to shoehorn their work into that mould. My point is that this data represents opportunity, if we choose to interpret it well. For example, it could offer insight into which words were most looked up in an online dictionary or which sections were most whatever the electronic book equivalent is of earmarked.

It could enable us to, if we so chose, see the sections other readers most liked. It could hint at human psychology by showing the books we like to be see to be buying and owning and referencing, but that we actually use the Cliff Notes to. It could do more, much more, than I’m capable of imagining.

And the data will always be necessarily incomplete. Publishers won’t be able to tell, for example, whether you put a book down because you disliked it or because life busy-ness befell you.

Or it’s never going to be able to truly account for anomalies such as me. I’m pro-ebook (pro-any book, really), but terrible at remembering to read them. I inadvertently bought both an electronic and physical copy of The Queen of Katwe because I forgot I had the ebook version. I have, to date, failed to read either.

The issues I foresee include whether publishers are willing to offer us transparency (given that they’ve had this data for a while and only Kobo has released this and only now, the answer is no), as well as how to channel that data into something that improves the storytelling. Goodreads and other socially focused websites that aim to make reading sticky and to enhance audience engagement, for instance, have long tended to fall flat.

While I’m probably being overly optimistic, I’ll be interested to see how this reading data collection pans out. Because I’d like to hope that anything that helps us get more people reading more—which is surely the ultimate aim—is going to end up being win–win.