As children shrug off their tween years and enter the tribulation-ridden terrain of teenage hood, the art of telling stories for them becomes more exact and tenuous. Tales still need to entertain yet they must also strike such firm and resounding accord with their intended audience that for readers to abandon them would be like dissing out on themselves or at least, their friends. Two new titles in town, which address each of these age groups with terrific virtuosity flow from the pens of Michael Gerard Bauer and Tamsin Janu and deserve closer scrutiny. 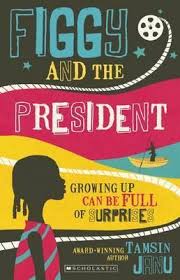 Figgy and the President is Tamsin Janu’s second book featuring Figgy, a young African village girl with limited world reference but enormous ambition and tenacity. Figgy is one of the most endearing characters I have ever met. She and her Ghanaian friends and family are so richly portrayed; it is a delight to be part of their adventures. The characters are complete enough that this tale could take place almost anywhere. That it is set in Ghana is merely an enriching added bonus. As with Figgy in the World, this story is full of warmth and originality. In this current snap shot of Figgy’s life, she and her best friend, Nana dream about their future careers, speculating on their successes and mapping out the paths for their chosen occupations. Trouble is deciding on a career is not as straightforward as Figgy imagines so when she unexpectedly lands a role as an actress in a locally made film, she immediately fancies this might be the future for her.

However just as she embarks on her newfound career, Figgy’s erstwhile absent, now heavily pregnant mama appears throwing Figgy into even more confusion and uncertainty. Figgy is then forced to abandon her own misgivings when Nana is mercilessly ripped out of their lives causing her to attempt to rescue him.

Figgy and the President is a superb story of tenacity, childhood resourcefulness, and friendship that mid primary readers will cherish. It reads with an innocent fluidity that I imagine tween-aged children influenced and shaped by our (often-trivial) First World dilemmas will find entertaining and fascinating, thereby giving rise to a stronger sense of empathy and humanity. A perfect follow up to Figgy in the World but able to be read alone.

Omnibus Books for Scholastic May 2016

It’s no secret that many of Michael Gerard Bauer’s books leave me quaking at the knees, usually with laughter and emotion. Surprisingly, this one is not at the top of my favourites list of his but I have a feeling it will be a hit among gaggles of school guys and gals nonetheless. 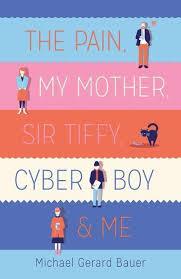 The Pain, My Mother, Sir Tiffy, Cyber Boy & Me is a new YA comedy that I initially found cloying (a bit like attempting to swallow a whole clotted-cream-and-jam-smothered-scone in one go) – not just because the title is so mouth-filling but partly due to the rabid use of capital letter actualisation and metaphoric description; this coming from someone with a pathological obsession to metaphoric-ise practically everything (see afore mentioned scone and cream example).  Nevertheless, like my predilection for scones and clotted cream, I could not give it up either. Discomfort is often  born from self -realisation, and whilst the way Maggie Butt thinks and reacts is a painful reminder of my own metaphoric inadequacies, figuratively speaking (and she does this a lot) her behaviour brilliantly mirrors the  psyches of many a teenager  whom I am certain will find this an outrageous and comforting connection.

‘Me’ is Maggie Butt and her teenage life is messy and mucked-up. Every time she gets close to achieving one of her ‘Three Specific and Realistic (life) Goals’ they are lampooned out of the water. There’s a drama queen quality about Maggie I found slightly unnerving at first however Bauer’s injection of sweet satire and ability to weave a generous amount of heart and soul into his storylines saved not only me, but eventually also Maggie and a few others besides. Bauer seems well accustomed with the fickle affections and feelings of pre-adult youth having raised a couple, taught dozens more and presumably been one himself portraying Maggie and her school mates with a raw sincerity I found touching . His 15-year-old female voice rings alarmingly loud and true, at times almost too convincingly so it is a relief when we are eventually shown Maggie’s true emotional turmoil, her warring desires, and not-to-much-to-ask-for expectations. Sir Tiffy, Sista Lista and a dude on a motor bike all help us (and Maggie) see what really truly matters whilst completing an intricate tapestry (stolen metaphor) of characters and satellite storylines.

In true Bauer style, The Pain…is more than it initially appears. It is wry and cool. It is funny and sensitive. It is a glorious collection of intelligent and side-splitting word play. It is unquestionably a riotous encounter of the teenage kind which connects solidly with today’s reader and transports older ones (like this one) back to nights with Paul Young (figuratively speaking), controversial casual-ware (see the T-shirt incident pg. 146) and thankfully possesses an ending that I’d cross  an ocean of metaphors to experience again.

Witty, relevant, and snappy, this junior novel will appeal in spades to younger YAers, as well.

Omnibus Books for Scholastic May 2016