It’s so exciting – being on the cusp of Christmas. If you are still anxious about the book-sized gaps left in your children’s Christmas stockings though, worry no more. Here is my final list of cracking good Chrissy reads for the year. We’ve covered meaningful and moving, so here are some just for fun titles, to fill you with all the merriment the season entails. If they don’t quite make it to you in time, save them for next year; there’s nothing like getting ahead with Santa! I hope you’ve enjoyed our Kids’ Book Bests this year and can’t wait to share even more fabulous titles from the world of children’s books with you in 2018. 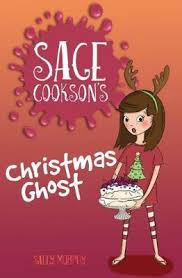 We’ve met Sage and her sassy cooking-based series before but this one takes the cake, or rather Pavlova! Frolicsome fun ensues after Sage and her celeb chef parents arrive in Western Australia to record a world-record attempt by Chef Myra to make the world’s largest ever pavlova. In spite of the fiercely debated origins of this quintessentially Christmassy summertime dessert and some irksome ghostly going ons, Sage eventually wades through gallons of meringue to save the day – and the record attempt. Best bit, of course – the delicious pav recipe in the back. A jolly addition to any Christmas stocking. Well it wouldn’t be Christmas without mentioning this little ripper now, would it. Can Sam and Tobii save Santa’s reputation and Sam’s kidnapped little sister before the Delivery Book is closed for the year? This light-hearted Christmas mystery, chockers with elves, weird smells, stolen Christmas wishes, nasty rashes and disappearing mailboxes is a spirited stocking filler ideal for 7 – 10 year-olds that is guaranteed to sustain the magic of believing. Just ask the author if you don’t believe me! 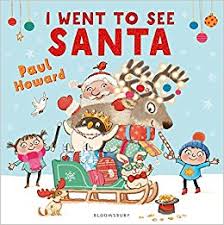 I Went to See Santa by Paul Howard

This picture book is positively exploding with festive fun. Based on the popular memory game and akin to the Twelve Days of Christmas, this story begins with a young boy who, with his new glasses, spies an outlandish assortment of Christmassy things including penguins, reindeers and snowballs. With a faint acknowledgement of beloved Christmas pantomimes, this is a jolly crowd pleaser great for 4 – 7 year-olds. It’s gratifying see good old Santa in his boardies catching waves albeit a little unconventional. This is, after all, the way many Aussie kids picture Christmas. Crumble’s bonzer rhyming ditty starts with one hot grumpy Santa throwing a major wobbly. He abandons his red suit and boots for boardies and zinc cream leaving poor, barely qualified, emergency Santa, Trevor to recruit a new sleigh-pulling team (a flock of beady-eyed Emus if you don’t mind) and commission a new sleigh (obligatory rusty ute) with which to complete the Southern Hemisphere deliveries, which he does, brilliantly. It’s a jovial win win situation freeing up more surfing time for Santa every year. Littlies and surfers alike will warm to this chipper tale. The Naughtiest Reindeer Takes a Bow by Nicki Greenberg

Ruby is back in all her glorious glittery naughtiness. It’s not that she deliberately tries to derail Christmas; it’s just that Ruby’s intentions always end up a little askew. This year, she is determined to get a head start with the deliveries but inadvertently gets horribly, hilariously sidetracked. It’s not until she is centre stage in a school musical that she remembers there was something important left undone. Delightful mayhem for fans of this ruby red-nosed reindeer. 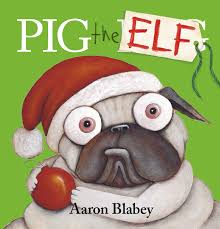 Pig the Elf by Aaron Blabey

Pig the pugnacious Pug is back, this time competing with his little mate Trevor for Santa’s affections. Actually is not affection Pig is after at all, but rather sackfuls of presents. His greed and overt excessive selfishness is what makes Pig so utterly unlikeable and yet so fantastically addictive. I have used this book in early childcare centres and Kindergartens where it has huge crowd appeal. An excellent example of naughty and nice and how you may only end up with ‘just desserts’ if you are too greedy. Obnoxious hilarity in the highest degree, recommended for pre-schoolers and above. This cheerful collection of predominantly animal inspired Christmas tales will make a gay addition under any Christmas tree. Popular children’s authors and illustrators have created stories that neighbour tales from not so well known writers yet are all redolent of that delicious Christmas spirit. From wombats to pudding making bears, turtles to curious sausage dogs, this anthology of short stories is lusciously illustrated and ideal to read aloud with younger readers or as a meaningful gift for more confident readers. Heartedly recommended reading.

Create Your Own Christmas by Isabel Thomas and Katie Abey

This book declares that Christmas is far too important to leave in the hands of Santa and a bunch of elves. It urges you to ‘take control of your festive destiny’, and what better way to do so than to cut, colour and construct your OWN CHRISTMAS! I love the premise of this definitely-not-boring activity book. Every single colour-saturated page is packed with things to make and do. Advent calendars, decorations, Chrissy cards, Christmas crackers, party hats, gift tags, Santa launchers – it’s all here in with instructions to make mess and have FUN! Just what you need to keep them occupied for longer than it takes to baste a turkey. Have fun with it, this Christmas.