Animal antics, you can’t beat them. Creatures great and small, they make us laugh, cry, and ponder. As characters in picture books, they are culturally neutral, globally recognisable conduits for expressing a range of emotions that small children (and adults) are readily able to relate to. In short, their appeal is universal. Today we get up close and personal with a few new animal orientated picture books bound to stir up the David Attenborough in you. 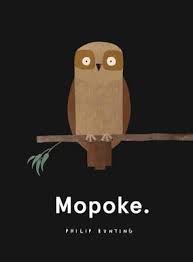 Hot new author illustrator, Philip Bunting has produced a veritable winner. Mopoke’s cultivated, impossibly restrained colour palette and fierce economy of words positively exudes brilliance. It’s the genius absence of colour and preamble that snaps readers into full alert, squaring their attention on the one and only character, a small southern boobook owl, aka Mopoke (although there is an incongruous cameo appearance by a certain nocturnal marsupial, as well).

Mopoke is quiet and unassuming, clearly one who relishes peace and tranquillity. The Australian bush at night, however is rife with annoyances forcing Mopoke to assume various airs of tolerance until finally, he makes a dramatic move.

Covertly comical and clever, one could interpret this picture book as a subtle poke, pardon the pun, at our social media addictions and the intrusive way they interrupt our daily lives. Of course, none of this will matter to readers under seven or so. They will simply be enthralled by Mopoke’s milk chocolate coloured marvellousness. An experience to be savoured. My Friend Tertius by Corinne Fenton and Owen Swan

Until I’d open the sepia hued covers of My Friend Tertius, I had no clue this zoo/war time story even existed. Fenton has, however not just written an historical, fact based picture book, she has encased the true-life story of a British Intelligence covert living in pre-war Hong Kong with that of Tertius, a small-orphaned gibbon into a kind of love story.

Told from Arthur Cooper’s point of view, Tertius soon becomes an inextricable part of Cooper’s life. Together they work and savour the steamy tropical pastimes of Singapore and Hong Kong until the onset of World War II finally forces Cooper to evacuate to Australia. He is loath to leave his best mate behind though so smuggles him into the country before having to surrender him to the Melbourne Zoo.

This is a story of turbulent times, separation, and unconventional friendships that somehow endure. Despite Tertius’ imperfect circumstances, one cannot help but feel a certain warmth for his relationship with Cooper. A fascinating picture book for older readers revealing yet more amazing wartime alliances thoughtfully illustrated by Swan. 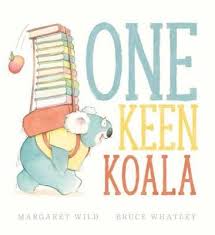 One Keen Koala by Margaret Wild and Bruce Whatley

Not since One Woolly Wombat have I come across an animal counting book that is so full of bounce and spirit, I thought I might have to a lie down after reading it. Wild’s wondrous way with words is so pleasing to read, you’ll wish this continues beyond the count of 12 happy possums. Light, breezy, and bristling with Australiana, her verse escorts young readers from numbers one to twelve whilst gently stimulating them with the notion that new beginnings are indeed enjoyable. The appeal for new pre-schoolers or primary schoolers is therefore ten out of ten.

Whatley’s illustrations are soft and unobtrusive albeit awfully cute and fun. He even manages to inject new life into an old favourite, the perennial wombat.

One Keen Koala is a counting / back to school book that almost makes me want to troop back off to Kindy. Highly recommended.

Stay posted for another instalment of animal inspired reads, soon.