I took a punt ordering children’s picture book Chicken Cheeks while on my everlasting quest to find great books about chickens. I am, after all, far from being in the book’s target audience.

It was the title and the cover image that sold me. I mean, who can go past the words ‘chickens’ and ‘cheeks’ accompanied by an image of a chicken standing on a moose and staring back at us through what I call (technical term) ‘fluffy pants’?

I knew my punt had paid off when I saw the inside flap of the dustcover. It reads: ‘This is a story with a beginning, a middle, and a whole lot of ends’. It appears I ordered a book about bums. Animal bums, to be precise.

I can’t reveal the plot without ruining the end-of-book payoff, but I will say the book features animals standing atop each other. This, of course, brings animals’ bottoms into close proximity to the heads of the animals on which they’re standing. Which makes the book sound far less G-rated than it actually is. Trust me, this book is safe for kids.

From moose caboose to penguin patootie to turkey tushy to hound dog heinie to polar bear derriere to, obviously, chicken cheeks, you’ll find yourself smiling at the terminology and the accompanying brightly coloured, brilliantly anthropomorphised animal illustrations. There’s even arguably some crossfit mockery (although I could be reading too much into this—I consider crossfit and its attendant carryings on ridiculous, but for all I know, this book was already published before the authors knew about the ‘sport’ and any reference is purely coincidental).

The other animals I share my home with—bees—also feature, making this a doubly suitable and successful chance purchase. But again, I can’t say any more without giving too much away.

What I will say is that I’m endlessly fascinated about where authors get ideas for such books. Even more so that they’ve then been able to get a publisher and bookseller and audience member like me to help them realise that idea. But I should probably be less surprised. Bums and farts are eternally interesting, whether you’re a sprouting child or a fully grown adult. (I believe The Day My Bum Went Psycho, for example, is a perennial bestseller.) 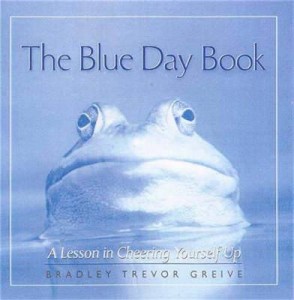 It reminds me of my creative writing university lecturer once telling us budding, undergrad writers that we should forget about trying to write the great Australian novel. His frustration was that The Blue Day Book, a gift book about frogs accompanied by pithy quotes (or something—my memory is hazy and I’m less than motivated to go read it to clarify details) had sold (and continued to sell) an absolute motza.

He meant this is a bleak warning, which we all duly noted (I mean, why else would I still remember that out all these years on?). On one level I find that bookselling information as depressing as my lecturer intended. On another, I find it quite freeing. It reminds me there’s more than one way to write a book, and more than one type of book people clearly like reading. I say the more the merrier to encourage reading full stop. Which prompts the question to which I have no sales-data answer: Frog-themed quote books are clearly sought after. Surely, though, books about bums and farting would sell more?