There were three debut authors shortlisted in the 2017 CBCA Older Readers category, signalling the new talent being unearthed in Australian YA. Unlike some short lists in the past, all the authors are female this year, representing the number of females writing YA.

Most of the novels are contemporary realism, although Waer is speculative fiction and Yellow has elements of spec fiction.

Many of the characters come from working class backgrounds and some are dealing with deep anger, particularly in Frankie and One Would Think the Deep.

Parents are missing, dead or substance-abusers in virtually all the books. Children are missing in Frankie, Yellow, Words in Deep Blue (where Cal drowned) and Waer (where Kemp is missing). Beach/water settings are prevalent and music features in Frankie and One Would Think the Deep.

The predominance of the colours blue and yellow on the covers reflect the colour schemes published in 2016, very different from the black dystopian and supernatural covers of the past.

In this post, I will focus on the three novels by debut authors because I’ve written about the other books previously. Waer is a werewolf tale, told as an intricate fantasy.

There are three narrators: Kaebha, a torturer, Lycaea and Lowell, who takes his pagan religion seriously, lives in a valley and finds Lycaea almost drowned. When soldiers destroy the valley dwellings, Lowell and Lycaea escape with some others. Archetypes from fantasy such as the journey, battles and hidden identity surface.

War and the displacement of Lowell and others form some parallels with current refugees, ‘To them we’re not people’.

Readers who enjoy Waer should love Megan Whalen Turner’s exceptional series which begins with The Thief. She has a new one out, Thick as Thieves. Yellow is a very well written story about 14-year-old Kirra. Her surfie father named her after Kirra Beach, but calls her ‘Yellow’ because of her yellow eyes. Yellow often suggests cowardice but this girl is brave.

The story is set near Byron Bay. Kirra’s father has left the family and her mother has become a drunk. In graphic scenes, Kirra forces her to detox. The words of the popular girls scratch her inside but she decides to fight back. ‘People only have the power to make you feel small if you let them.’ Her relationship with kind Noah seems promising but she wrecks it by getting drunk at his party.

Yellow becomes a ghost story when Kirra causes a dog to drown and then talks to a ghost boy in a disconnected phone box. She tries to catch his murderer, putting herself at risk.

Kirra’s English teacher and the local librarian recommend Lord of the Flies, To Kill a Mockingbird, Catcher in the Rye and The Bell Jar. All books worth pursuing…

Issues of forgiveness arise here and in Frankie. Frankie is Italian and funny. She was abandoned by her mother and thinks she ‘deserve[s] to fail’. Her younger half-brother, Xavier, who seems to be a thief, finds her and gives her a longed-for Joy Division album. In this book, musician Ian Curtis killed himself like Jeff Buckley did in One Would Think the Deep, but both their music lives on.

Frankie is set around Smith St, Collingwood (where Robert Newton’s Mr Romanov’s Garden in the Sky and some of his historical novels were also set).

The dialogue in Frankie is smart, with a streetwise voice. The scene where Frankie follows Nate with his ‘blue gaze’ to a ‘fence’s’ house, is chillingly intimidating. When Xavier disappears, the contrast between the lack of energy put into his disappearance compared with that of rich boy Harrison Finnick-Hyde is explored.

There are numerous descriptions of graffiti throughout the novel. Readers could perhaps create their own ‘Small Street Interruptions’ based on Michael Pederson’s website ‘Outside’ http://miguelmarquezoutside.com/.

Pederson leaves quirky temporary artwork (such as roping off a dandelion with a sign, ‘do not touch’ like in an art gallery) in laneways, backstreets and buildings to surprise and encourage people to slow down, be in the moment and recognise surroundings. He attaches them with Blu-tak and removable tape.

The other three shortlisted books are: 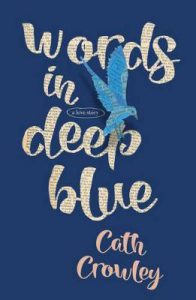 One Would Think the Deep by Claire Zorn (UQP) was recently shortlisted for the NSW Premier’s Ethel Turner award.

Music helps but doesn’t heal protagonist Sam’s residual rage and grief. There is a playlist at the end of the book featuring Jeff Buckley’s Loser, So Real and Grace and Split Enz’s I Got You (which Jennifer Niven also uses in All the Bright Places). 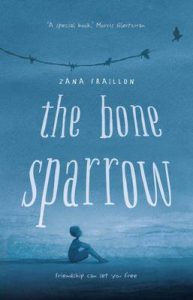 Zana Fraillon’s next novel, The Ones That Disappeared, about child trafficking, will be published this month.