Some other snaps from the Conference: Bob Graham took us through his life and his life’s works. He was then treated to orchestrated interpretations of four of his picture books (composed and conducted by George Ellis) including How To Heal A Broken Wing. Ursula Dubosarsky and Tohby Riddle took to the stage to discuss the process behind their smash-hit, The Words Spy, and its sequel, Return of the Word Spy. 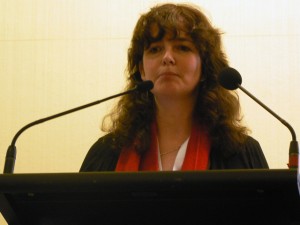 … with Boomerang Books’ own Dee White, author of Letters to Leonardo and helmer of Kids’ Book Capers. The cake in question before Maurice and I hacked it to bits. For the record, it was delicious.