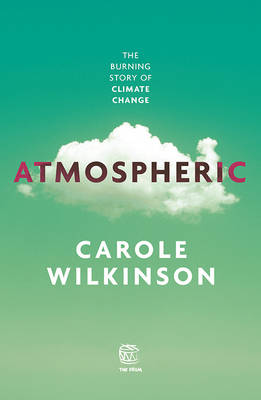 Carole Wilkinson is an Australian author equally comfortable in the realms of fiction and non-fiction. The things that link her diverse books are passion and research. Carole chooses topics that she has a keen interest in, and then researches the hell out of them. Her latest book for kids is a non-fiction book about climate change — Atmospheric: The Burning Story of Climate Change. As part of her Atmospheric blog tour, Carole has written a Literary Clutter guest post about the writing of this book. Take it away, Carole…

The story behind Atmospheric

I’ve tried to do the right thing environmentally, ever since the state of the environment first became an issue way back in the 1970s. But as time passed, I realised that climate change was not just a theory, but a real threat that was going to affect all of us. I decided that I needed to do more, and so I joined my local climate action group, Yarra Climate Action Now.

Someone recently asked me what it was like being in the glamorous world of climate action. Glamorous? There is nothing glamorous about it. Previously, most of what I had done for the climate was from the comfort of my own home (separating out the recycling, switching off lights, yelling at politicians on the television). Once I joined YCAN that changed. I found my self sitting through long council meetings that went till midnight; standing on the steps of Parliament House waving a placard in the rain; asking people in the street to sign a petition, only to have them tell me how stupid they thought I was. Nothing glamorous about that.

That doesn’t mean I didn’t like it. It was great to meet other people who were as keen, if not keener, to stop climate change as I was. And we have been involved in some successful campaigns, particularly in the inner suburbs of Melbourne, where cycling has increased because of lobbying for a better network of bicycle paths, the local council has embraced people growing veggies in the streets, and plans to build a polluting freeway instead of new public transport have been stopped.

It was only a matter of time until my two main interests, climate action and writing, intersected. When my publisher suggested I write about climate change, I immediately said yes. I like research. I like it a lot. But this book was the biggest research task of my life. Bigger even than my obsessive research about dragons. That was a leisurely meander through the archives over a ten-year period. I had to research and write Atmospheric in a year and a half.

And then there was all that science I had to get my head around. I couldn’t explain all the scientific stuff behind climate change until I understood it all myself. Fortunately, I’d done science at school, and before I was a writer, I spent 15 years working as a laboratory assistant. So I’m not scared of science. For the first time, that part of my life didn’t seem completely disconnected from my writing life. It gave me the confidence to tackle the science and interpret it for a young audience that might find it a bit daunting.

I’m back writing about dragons again now (Dragonkeeper 6). After Atmospheric, it seems like a holiday!

Want to check out Carole’s other blog tour stops? Here’s a list.

I am very much looking forward to reading Atmospheric. I’ve loved every one of Carole’s previous books, so I have no doubt this one will also be an engaging read.

One thought on “Carole Wilkinson’s ATMOSPHERIC”