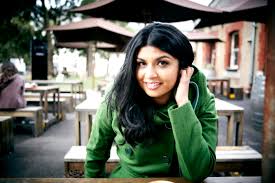 Melissa Keil is the author of two of my favourite YA novels, The Incredible Adventures of Cinnamon Girl (2014) and Life in Outer Space (2013).

Thanks for speaking with Boomerang Books, Melissa.

I’m based in Melbourne, but get to travel around a bit for writers’ festivals, school visits and so forth. The YA lit world is pretty amazing in Australia – apart from the festivals and speaking gigs, I get to catch up with other authors pretty regularly at launches and other events. It’s a lovely, supportive world to be part of.

How did your first YA novel, Life in Outer Space, get published? Which awards has it won or been shortlisted for?

My first novel was the winner of the inaugural Ampersand Prize run by Hardie Grant Egmont, who, at the time, were looking for real-world manuscripts from unpublished YA authors. I think it was just one of those magical moments where the stars aligned and the manuscript just landed in front of the right people at the right time. It’s been nominated for a few things, including the Prime Minster’s Literary Award, The CBCA Book of the Year (Older Readers), the Gold Inky, the Western Australian Premier’s Book Awards. It was the winner of the Ena Noel Award, and it was also a YALSA Best Book for Young Adults in the USA.

There’s still a buzz happening around your second novel The Incredible Adventures of Cinnamon Girl. Which awards has it won or been shortlisted for and what’s happening with it now? Thanks! Cinnamon Girl was shortlisted the Gold Inky Award, the CBCA Book of the Year (Older Readers), the Western Australian Young Readers Book Award. The most exciting thing that’s happening at the moment is that it’s getting ready to be published in the US and UK early next year. Both publishers have chosen quite different (but amazing) cover looks, and the US edition has been illustrated by a fantastic comic book artist called Mike Lawrence. I’m looking forward to seeing her out in the wider world!

Why do you think these books resonate so strongly with readers?

That’s a hard question! All I can say is that I write the characters who I love and connect with, whose worlds I want to be immersed in. They feel like real people to me, and I hope that that translates onto the page.

I started out as a children’s book editor, and as part of my job, wrote lots of books ‘in house’, mostly junior non-fiction and preschool early-learning type books. I’ve had a picture book, Rabbit and His Zodiac Friends, published. I also have lots of half finished books and short stories in my bottom drawer!

I’m finishing up my next novel, tentatively titled The Secret Science of Magic. It’s been one of the most challenging things I have written so far, but I’m on the home stretch with it now.

The last book I read was Vikki Wakefield’s Inbetween Days, which was just beautiful, with some wonderfully complex and well-realised female characters and relationships. I’ve just started reading Carrie Brownstein’s Hunger Makes Me a Modern Girl, which I’ve been looking forward to reading for a long time.

All the books! I think my friends and family are tired of me asking for books and book vouchers, but there is no such thing as too many books. There are loads of things on my wishlist – one of the things I would really love though is the complete Obernewtyn Chronicles. My first four books are original editions with covers that don’t match the newer books – as all true book-nerds know, this is just unacceptable.

All the best with your books, Melissa.

Thank you for having me!