Magabala Books are going from strength to strength. They are perhaps most well-known at the moment for publishing Bruce Pascoe’s books for adults and children such as Dark Emu, Mrs Whitlam and Fog a Dox but Magabala has a strong backlist across age-groups and genres with great new books coming all the time. Black Cockatoo is of comparable quality to Bruce Pascoe’s writing for young people. It is written by Jaru and Kija man Carl Merrison and Hakea Hustler, illustrated by Dub Leffler (Once There Was a Boy and Sorry Day). It is a memorable story about an Aboriginal family living in the Kimberley.

Thirteen-year-old “Mia, her skin unblemished, radiated optimism and hope.” Mia loves her Country but sometimes wants more. Her grandmother tells her that she lives in both worlds. “You will be strong both ways.”

Although she is a spirited character she must show respect to her older brother. However fifteen-year-old Jy’s anger ripples “under his scarred skin”. He disrespects the family’s past and is killing birds, including Mia’s totem the dirrarn. Mia protects the injured bird for as long as she can.

Education is valued by the family and language, particularly used for bird names, is included.

Both Black Cockatoo and Blakwork are insightful, confronting literary works. 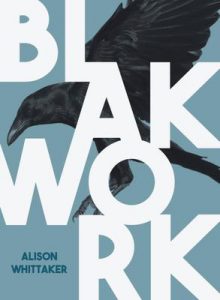 ‘a love like Dorothea’s’ is a reinterpretation of Dorothea Mackellar’s ‘I Love a Sunburnt Country’ and is positioned sidewards on the page. “I love a sunburnt country. That is mine but not for me.”

‘outskirts’ is a chilling tale about a woman who worked in an abattoir and ‘killwork’ is non-fiction set in the same place. ‘vote’ addresses refugees and intermarriage where “blakness” is “a code embedded in your bones – it didn’t bleed through you, it constituted you, so there was no letting out.”

‘tinker tailor’ is a satire about Blacktown in Western Sydney. There are different stories behind the naming of Blacktown such as, “‘They call this place Blacktown because it was given to two Aboriginal men.’  Seemed weird to me that the whole continent wasn’t Blacktown.” The National Centre for Indigenous Excellence in Redfern on Gadigal land is considered in ‘futures. excellence’: “For people so put out on the fringes, we blaks love the centre”. In ‘the last project’ a note on the Centre says “We’re coming back, daught. There’s work to do.”

‘bathe’ is set at Maroubra Baths. “This is a poem about not suffering.”

‘The History of Sexuality Volume III’ is a poem about desire: “two blak women [who] love each other”.

Language is used in ‘’palimpsest’ and there is some superb writing in ‘rework’. “Pull over here, watch some spinning nightly fights reach across a highway’s ribs. At the Kamiloroi Highway’s spine two signs rise and speak and re-speak…”

Blakwork has just been shortlisted for the Victorian Premier’s Literary Awards. Both it and Black Cockatoo are strong, significant works.