The 2017 CBCA Early Childhood Short List features animals (as always), with two picture books specifically about birds. Two books are about farms and one is set on a Northern Territory camp. Family remains an evergreen theme and humour is the core of some of the books. This funny story is the stand-alone sequel to Too Many Cheeky Dogs. The book is sponsored by the NT Government and has an engaging narrative with a cyclic structure based on the seasons and changing weather. Animals are the highlight, though. At first, too many cheeky dogs keep the other animals away. Then the rains bring a gang of goats, the sweaty season brings a ‘drove of donkeys’, cool winds bring a herd of horses and drought brings a bunch of buffaloes and caravan of camels. But when it storms, ‘all the cheeky animals go crazy’. And the cheeky dogs do nothing to stop them, for a while …

Illustrator, Dion Beasley is a 24-year-old Indigenous man with muscular dystrophy. He is also deaf so he and author, Johanna Bell, collaborate using Skype and sign language. He has a naïve drawing style with plenty of humour, such as how he shows when something happens to Grandpa’s pants, and when goats drive. The endpapers give an overview of all the animals. Children could practise counting animals throughout the book and the Too Many Cheeky Dogs website includes a child-friendly activity of making wrapping paper with cheeky dogs.

Family is important to this story and includes Dad, Mum, Grandpa, Uncle, Aunty, brother, sister, but no Grandma. Nannie Loves fills this gap. 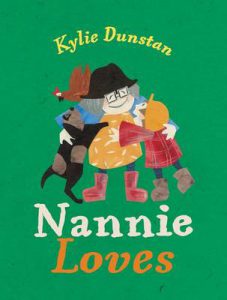 Nannie lives on a cosy and inviting farm, with ‘rolling hills, a muddy creek and lots of paddocks, green in winter, brown in summer’. It is a quintessential Australian setting and makes us want to walk into the story. The scenes are contained to provide an appropriate focused framework for young readers; there is repetition of the words, ‘Nannie loves …’ to help beginning readers; and there are some wordless pages.

Nannie collects her mail wearing her gumboots. She loves her letters, her animals, her garden and her family. She laughs with her family who help her work around the farm. She loves them and she loves the young narrator. This book has a gentle humour, such as when Nannie watches for Grandpa in one of his many checked shirts.

The greens of Nannie’s farm change to browns of a drought-stricken farm in All I Want for Christmas is Rain. All I Want for Christmas is Rain written by Cori Brooke, illustrated by Megan Forward (New Frontier Publishing)

This story begins clearly with an illustrated bird’s eye overview of a dry farm. In the rhyming text, the protagonist, Jane, asks Santa for help with her family’s threatened property, ‘My mission was clear – I had hatched a great plan: I would ask for help from the great bearded man.’

Santa seems to fulfil her wish and there is a particularly evocative picture of the family dancing in the rain and mud on Christmas Day.

Children could extend their experience of this story by reading some other Australian Christmas stories such as Glenda Millard and Stephen Michael King’s Applesauce and the Christmas Miracle and Colin Buchanan‘s books, or by painting an Australian farm scene using mud.

In contrast, The Snow Wombat is set in a very different part of Australian. The Snow Wombat written by Susannah Chambers, illustrated by Mark Jackson (A & U)

Showing a wombat’s life in the snow is an original idea for a picture book. Like some of the other useful endpapers in books described here, these endpapers are a highlight and show a map of the wombat’s movements and haunts.

Every sentence begins with the word ‘snow’, and many begin with the phrase ‘snow on …’, which is helpful for beginning readers. The repetitive, simple text becomes even more predictive, encouraging young children to say or ‘read’ the rhyming word.

After reading the book, children could make wombat footprints in ‘snow’ using baking powder and conditioner or shaving cream. Tracks of some of the other animals in the book could also be made by indenting the ‘snow’ with fingers or sticks.

In a different illustrative style, cartoon seagull, Chip, follows with a funny story. Chip loves eating chips – fat, skinny, soggy, sandy, crunchy, spicy chilli-dipped chips – even though he doesn’t feel well afterwards. This is a tale about healthy eating in the guise of a hilarious story about Chip and the length he goes to eat when people are banned from feeding the gulls.

The illustrations include newspaper collage (apt because it’s used for wrapping fish and chips; a newspaper article also features). My favourite illustration shows Chip with a noodle box on his head and noodles streaming out like hair.

Another bird protagonist in the Short List is Gary. Gary is a racing pigeon who can’t fly but dreams of adventure. He works on his scrapbook of travel mementos on race days when he’s left alone in the loft, even though he’s never travelled. When he lost his balance one night, he fell into the travel basket and was carried far from home to the city. Of course the racing pigeons flew home, but Gary was left by himself. Fortunately he had his scrapbook of travel mementos and was able to plot his way back to the loft.

This is a very appealing story of overcoming obstacles or disability and of flourishing in different surroundings. New situations can be frightening for children and Gary demonstrates courage and ingenuity, which could help young readers.

The illustrations are created using mixed media and, again, in this book we find interesting endpapers.

After reading the story, children could use found objects and mixed media to create their own scrapbook about travel.

2 thoughts on “Birds, Animals and Seasons in the CBCA Early Childhood Short List”