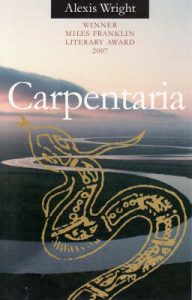 has had a new lease of life with the appointment of CEO and Artistic Director, Zoe Pollock for the festival’s 55th anniversary. The festival was about “The big stories – and the little ones in between” and the biggest story of them all was probably the recognition of Indigenous literature and creators, particularly the tenth anniversary of Alexis Wright’s novel Carpentaria, which won the Miles Franklin award. This was uniquely celebrated as an immersive dramatic and visual performance inside “Angel’s Palace”, a specially constructed “art-tent”, designed by Gordon Hookey. The opening address was given by Alec Doomadgee, who spoke about “Indigenous knowledge creation”. He showed excerpts from his seminal film Zach’s Ceremony. Alec said that “reading books gives you a real history of the country you’re in”. He uses the arts and culture to tell stories and create change and urged us all to go away and do something for change. My family has something planned …

I was fortunate to moderate a panel session about “Connecting to Place” which explored how three authors create place as a character (or not – as we discovered) in their stories. Melissa Lukashenko spoke about the significance of land in her beautifully written, award-winning novel Mullumbimby. Ashley Hay let us look inside a special Brisbane house, peopled over time by two vulnerable women whose lives interconnect. Her novel, A Hundred Small Lessons, has just been shortlisted for the Queensland Literary awards. Kate Mildenhall’s debut novel, Skylarking, was one of my best books of 2016 for the Weekend Australian. It is set on a windswept, isolated cape and is a fine piece of writing about friendship between two young women. Kate is destined for big things in the literary world if she continues to write at such a high level.

I also attended a session about the Australian book industry, “Published in Oz”. It was exciting to hear how writing and reading is the biggest art form that people engage with in Australia. 20% of Australians attend a book event annually and Australia has the highest per capita attendance at writers’ festivals in the world. Reading books is the number 1 favourite leisure activity of Australians. Double the number of Australians enjoy reading books to attending sporting events, playing video games or other pursuits. Australia also has the world’s top independent bookseller market. Another enlightening session was a workshop for adults on visual literacy by James Foley. He has illustrated Sigi Cohen’s, My Dead Bunny, The Last Viking by Norman Jorgensen and other books.

The BWF also hosted “Word Play” an outstanding program for young people. My highlight was hearing Wendy Orr, author of the Nim’s Island series (the genesis of the movies), Peeling the Onion and the masterful historical fantasy based on the Minoan myths of bull-dancing, Dragonfly Song. This novel has also just been shortlisted for the Queensland Literary awards. 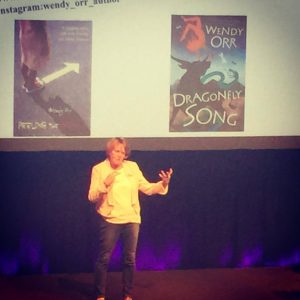 Thanks to the organisers of the 2017 BWF and to those involved. There was a very special buzz in Brisbane.