THE SKY IS NOT THE LIMIT 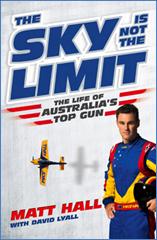 Growing up in Newcastle, NSW, Matt Hall didn’t give much thought to his future. All he knew was when his Dad would take him flying, the world suddenly made sense to him. The stories he loved best were those of pilots, the games he played involved planes and airflight. Then one day he realised it could be the key to his future.

In The Sky is Not The Limit Matt tells the story of how he went from dreamer to flying ace – how he cracked a place in the highly disciplined and demanding RAAF training program, a gruelling mental and physical school where being an excellent pilot is just the starting point to success – and how he learned about risk, danger and loyalty. He tells how he graduated to great acclaim – on the eve of September 11. And how his world changed when he found his first assignment out of school was to fight in the Battle of Baghdad. Here, he experienced death and loss for the first time and emerged from the war safe but a wiser, more mature top gun.

Almost on a whim Matt entered the Red Bull Air Race, the most competitive air race in the world.

Despite a spectacular crash on the water, he finished in third place, becoming the first rookie to ever stand on the podium. And it was the start of a new career which has seen him break records and thrill crowds with his antics.

Now flying for himself, Matt Hall has become one of the best known pilots in the world of aviation. He has over 1500 Hornet hours, 500 hours in the F-15E Strike Eagle (including combat), over 700 hours in light aircraft and over 500 hours doing aerobatics. His story is a rare glimpse into a normally closed off world, where skill, quick thinking and a cool head can mean the difference between life and death.