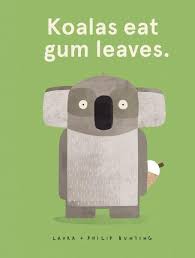 Holiday time is playtime and what better way to indulge in the joy of life than with a playful picture book or two. I could wax lyrical about all of these titles all year long, so if you love animals behaving badly in picture books that crack you up, check out these recent releases before summer is through. 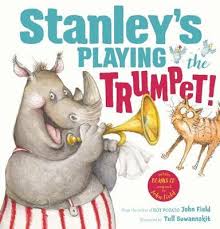 Stanley’s Playing the Trumpet by John Field and Tull Suwannakit

It’s not mandatory, but pop on the bonus CD of this cheerful tale about a determined musical maestro as you read this picture book, and you’ll soon be jazzing around the lounge room. Catchy verse by Field and the most sublime illustrations by Suwannakit bring Stanley, his sister, Fran and the entire crazy band alive with pulsing alliteration and an underlying message of when at first you don’t succeed, look for an alternative. Fulfilling your potential and finding your true talent are old themes drummed into exuberant new life with Stanley. Little musicians from four upwards will love jiggling to this. Keep your ears and eyes tuned on reliable rhyming verse as you escort ladybird on another action-packed holiday. Yes, she’s off again, full of glorious glitter (on every page, as promised), this time to the London Zoo. There’s the usual cacophony of interesting sounds to experience until she spies two old foes and overhears their dastardly wicked plan to kidnap a monkey and coerce him into stealing the Queen’s crown. In her quietly indomitable way, ladybird alerts the zoo’s menagerie and cleverly foils the crime. Who says being small and quiet would never amount to anything! This is a longish but lavishly illustrated and executed picture book to share with 3 – 5-year-olds. Rodney Loses It! by Michael Gerard Bauer and Chrissie Krebs

Chaotic unfortunate, Rodney has but one overriding desire, to draw. He lives and breathes it, even does it in his sleep. There is only one thing Rodney loves more, Penny Pen, his penultimate writing companion and perhaps the most treasured thing in his universe. So imagine the immense, blood-draining, trauma he endures when Penny goes missing! We’ve all been there; that frantic, irrational, world’s-end place we find ourselves in when we can’t find … a pen, never mind a favourite pen. When Penny disappears, Rodney loses it – big time. Thankfully, as with most cases of gross- oversightednesstitis, Rodney and Penny are eventually reunited, enabling Rodney to carry on with his life’s vocation. Written with Bauer’s usual witty observation and playfully illustrated by Krebs this is a supremely silly and joyful story encapsulating a common creative crisis that pre-schoolers and anyone who ‘loves nothing more than drawing‘ will appreciate. Pig the Star by Aaron Blabey

Most of us are well acquainted with the recalcitrant pug, Pig. He is nothing if not one to ever shy away from the lime light. In fact, he obstinately refuses to give it up in this instalment of pug-mania after he and Trevor are invited on a big photo shoot. Fame and adulation transform the repugnant pug to even greater (or lower) levels of nasty until a talent scout recognises the true star of the show. Thus begins Trevor, the sausage dog’s prima ballerina career. Will Pig allow Trevor his moment to shine? That is the question for future Pig tales and one I bet Pig fans can’t wait to find out. I adore this picture book team. They collaborate without preamble and with pure comic purpose. This tale exemplifies the sublimely ridiculous situation of a mouse swallowed by a wolf only to discover he is not alone inside the wolf. Duck resides there with all the contentment of one whose life is now without woes and worries, like being eaten by wolves. Duck and Mouse enjoy an indulgent lifestyle within the wolf’s belly until one day a hunter threatens their existence. Together they work to restore calm although, for Wolf, his debt to them subjects him to nightly anguish, thus the howling wolf. Subtle, hilarious and as ever, ingenious, this tale of making the best of your situation and living with others is destined as another Barnett Klassen classic.

Another classic in the making is by the talented Bunting husband and wife team. Superbly sparse and blunt to the point of overwhelming shortness and sweetness, I absolutely adore this tale of one errant koala’s quest to find something more palatable to eat than boring old gum leaves. While it’s true koalas are notoriously hard to please, eating only a specific few species of gum leaves, this rebellious marsupial bunks that idea after a gluttonous episode of ice cream guzzling. And, like all young kids who have had too much of a good thing, soon lives to regret it. Delectable linear drawings and bold contemporary text make this one hard to resist. Highly recommended for pre-schoolers and nature lovers everywhere. 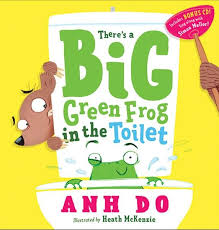 Anh Do does silly with remarkable sincerity. Along with McKenzie’s action-crammed slapstick illustrations, this latest zany title epitomises the crushing need to pee and not being able to. A bonus CD lets you sing-a-long to little bear’s demise when a big green frog lands in his toilet making this a nutty take on the red-back-on-the-toilet-seat situation. Frivolous fun sure to win a seat for three-year-olds and above and people with frog fetishes.