Occasionally a thing that you witness, a song that you hear or a line that your read manifests itself indelibly within you, seemingly forever. Sometimes, not always, you remember the exact time and place and occasion that these erasable impressions mark your memory for the first time. Often this phenomenon occurs when you are still young in years and free in thinking. Memorable moments can be fortifying but also confronting and shocking, which is why books like these, Along the Road to Gundagai and Gallipoli, constitute essential reading for young people.

Perhaps, had I been exposed to more picture books like these that introduced history and invited discussion and explanation, I may have been less shocked by the brutality of humans at war. Who knows? It was all in the past…

As ANZAC Day approaches urging us to remember the past, it’s difficult to know what to reach for when trying to share the meaning of these particular commemorations with your children. Unless they observe or participate in ceremonies or have relatives that do so, school is often the first place youngsters encounter terms like ANZAC Cove, the Great War, and diggers.

War is messy and cruel. It is horrid and scary but it is also about bravery, ingenuity, mateship, and perseverance. Along the Road to Gundagai and Gallipoli are picture books that capture the bitter essence of war in a way that is non-threatening but hauntingly real.

Penned by Australian musician, Jack O’Hagan in 1922,  Along the Road to Gundagai has an almost anthem quality to it. It is not the first time a well-known song or verse has been purposely presented as a picture book but like others before it, the coupling of well-known lyrics with evocative images serves to anchor our appreciation and deepen our understanding of the story behind the words.

It is essentially a lament by the young men of the Great Wars; of their yearning to return to their youth which was so irrevocably spoilt by war.

Award winning Aussie illustrator, Andrew McLean, ironically ventured into the world of digital art to portray this poignant piece of history. The recollections of our narrating lad’s ‘old bush home and friends’ are all succinctly framed; captured moments matching the lyrical text, soft yet glowing. 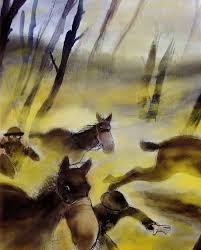 Conversely, scenes from the scarred battle fields imbue entire pages with dark, sombre, desolation. Particularly arresting for me was the contrast of sunny skies over the Murrumbidgee and the gas-filled atmosphere of battle where even the horses wear gasmasks; the whites of their eyes betraying their confusion and terror.

All of us have a road to Gundagai we’d like to revisit. This powerful picture book rendition of an Aussie classic allows readers young and old to do just that. Picture books about the ANZACs of WWI abound. Many succeed thanks to the legendary intensity of the subject matter, the sensitive translation of emotions through illustrations and the poetic rendering of a brutal period of modern day history. Gallipoli by Kerry Greenwood and Annie White delivers all these and more.

It is simply the story of Gallipoli. It is Dusty and Bluey’s story told through the eyes of Bluey’s great grandson. But before you say, not another ANZAC tale, look again; at the sepia-coloured end pages depicting wartime and post war snap shots of our two mates. Be swept along on their adventure, across vast oceans and scorching deserts and No Man’s Land. Feel the hunger, the terror and the relief shared by these two young men whose unbreakable friendship withstands time and war. 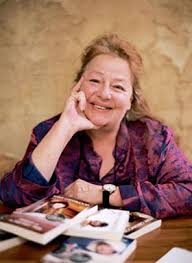 Greenwood leaves no stone unturned in the retelling of this infamously failed military campaign, however 7 year olds and above could easily master and enjoy this account themselves because it reads as fluidly as fiction. There are few dates to stumble over and enough storyline to accommodate a myriad of historical revelations including; the futile charges, trench survival, Simpson and his donkey(s), and the Roses of No Man’s Land.

White never belittles the enormity of Bluey and Dust’s situation. Her illustrations show mortar attacks and bleeding wounds in full colour yet are neither cheerless nor grim. Subdued sepia photographs are ‘stuck’ on every page like an old well-loved album guiding the reader from the past to present day remembrance.

Stirring, significant and worth sharing, especially with school-aged children.

War is certainly not joyful but it was special to sit and read these with my 8 year old and by some strange twist of intent, it was she who helped me through the more emotional bits.

Along the Road to Gundagai