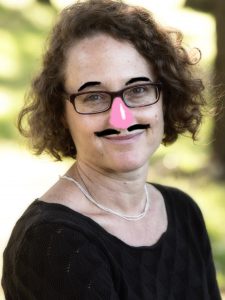 Hi Alex Ratt, could you tell us about yourself and your alter-ego?

That’s a very existential question! I have to decide which is me and which is the alter ego…Well, I was Frances Watts first, so let’s start with her—I mean me.

I have written twenty-two books, ranging from picture books (including Kisses for Daddy and Parsley Rabbit’s Book about Books, illustrated by David Legge, and Goodnight, Mice!, illustrated by Judy Watson) to historical novels for young adults (most recently The Peony Lantern, set in nineteenth-century Japan). And then there’s my less fragrant alter ego, Alex Ratt. I thought being someone completely different would allow me the freedom to write something completely different—hence Alex Ratt. (Also, Alex Ratt has a big bushy false moustache and Frances doesn’t. And who wouldn’t jump at an excuse to wear a false moustache?!)

Who is Jules Faber? Jules Faber, I’m delighted to say, has a much more straightforward identity: he is Jules Faber! He is also an extremely talented cartoonist and illustrator, well known for his work on Ahn Do’s Weirdo series and David Warner’s The Kaboom Kid series.

How important are the illustrations in this book?

The illustrations are integral. The Stinky Street Stories (Pan Macmillan Australia) should feel welcoming and accessible to all kinds of readers, whether they are confident readers or not, and the illustrations do so much to convey the humour that is inherent in the text. One thing I particularly loved about working with Jules on this book is his spirit of adventure. Whatever wacky image I can dream up, he is prepared to draw. A sculpture of a rocket ship made entirely of carrots? No problem!

What type of comedy do you write?

Despite the word ‘stinky’ in the title, I don’t actually see the humour in The Stinky Street Stories as focusing on the gross. To me, the real humour is in the absurdity of situations and images. And the challenge is to take the absurdity and, within the bounds of the story, make it logical.

How do you get your readers to laugh out loud (as I did about some carrots and a pumpkin head)?

I’m glad you liked those bits—that’s exactly what I mean about the humour being absurd rather than gross. That’s where I find those laugh-out-loud moments: in unexpected juxtapositions, in ideas pushed to ridiculous extremes, in characters who treat these hilarious scenarios seriously.

Brian is a very funny character. Could you tell us about him, his sister Brenda, and any other characters?

Brian (‘call me Brain—everyone does’) has a somewhat overinflated sense of his own intellectual prowess, which is why he is able to meet absurdity with seriousness. His friend Nerf is the perfect sidekick, being just ever so slightly dafter—but loyal and good-hearted. The real brain of the family is Brian’s sister Brenda. And in his heart, Brian knows it to be so, and calls on her in moments of crisis.

What is your favourite scene in The Stinky Street Stories? You picked it yourself: the pumpkin heads. Because within that particular story, ‘The Ripe and Rotten Reek’, it not only makes perfect sense for Brian and Nerf to be running across a field with pumpkins on their heads, it is a positively brilliant plan!

Who do you hope reads this book?

Everyone! By which I mean boys and girls. I had a lot of fun turning gender stereotypes on their heads. The (anti)heroes might be boys, but the girls have a strong, smart, sassy presence. And, as I said above, I hope the book is enjoyed by confident readers and reluctant readers—we (by which I mean the whole village that makes a book: the author and illustrator and publisher and editor and designer) were determined to make it a book that had something to offer every kind of kid and every kind of reader.

What’s next in Stinky Street?

The second in the series, 2 Stinky, will be published in August. There are smelly sewers, pongy penguins…and a house of (stinky) horrors!

What other humour have you written? All my books have humour in them—it’s just the way I’m wired—but the first overtly humorous books were those of the Ernie & Maud series, featuring trainee superhero Ernie Eggers and his trainee sidekick: a sheep called Maud. More recently I have contributed stories to two humorous anthologies, Laugh Your Head Off and Laugh Your Head Off Again.

How many aliases do you have?

Oh dear…You’re on to me, aren’t you?! The truth is, Alex Ratt is not my only pen name. Frances Watts is a pen name too. (Yes, my pen name has a pen name.) My real name is Ali Lavau, and I am a very serious book editor who hardly ever wears a false moustache to work.

Thanks very much, Alex, Frances, Ali …

Thank YOU! (I loved these questions.)

And – here is a video about the book! https://www.youtube.com/watch?v=wORzbpzfTzs&feature=youtu.be