There really is something for everyone in Ford Street Publishing’s latest collection of Australian stories, poetry and artwork for teens – Rich and Rare. With pieces from almost 50 fab authors and illustrators, including Shaun Tan, Judith Rossell, Susanne Gervay, Gary Crew, Justin D’Ath and Michael Gerard Bauer (to mention a few), the anthology delivers tantalizing morsels to suit every reading taste. There’s an alien invasion, a Dickensian-style thriller, a warrior adventure in old Japan, a bushranger tale, intrigue in the cane fields of northern Queensland and much, much more.

Editor Paul Collins joins me ahead of next month’s book launch to take us inside Rich and Rare and to reflect on his own prolific and successful career as a writer, editor and publisher. Paul is best known for his fantasy and science fiction titles which include The Jelindel Chronicles, The Quentaris Chronicles ─ co-edited with Michael Pryor, and The Warlock’s Child, done in collaboration with Sean McMullen. He also runs Ford Street Publishing and the Creative Net Speakers’ Agency.

JF: Congratulations, on Rich and Rare, Paul. What a line-up of Australian talent! What can readers expect from this collection?

PC: I’d like to think a sumptuous literary feast. No one will go away hungry, as the collection is a literary banquet with something for everyone.

JF: How does it compare to others anthologies you’ve edited?

PC: Anthologies aren’t as easy to put together as they might seem. An editor starts off with a list of potential contributors. I’ve been lucky in as much that most of my list this time around contributed illustrations, stories or poems. Across the three anthologies I’ve edited lately, I think everyone I’ve approached is represented. But not one of the collections has everyone. So too people reading Rich and Rare will be happy to see some contributors lacking in the other anthologies, but on the reverse mystified that others are missing. This collection is more illustrative and has longer and more varied works. This will please some, and perhaps disappoint others. So in answer to your question, it’s very subjective. A creator’s latest work is always their “best” work.

JF: What are the challenges of editing such a large collection of stories, poems and artwork? 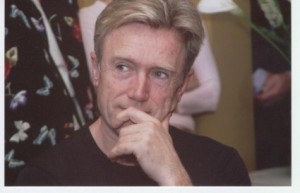 PC: Most contributors aren’t precious about their stories being edited. Those who are can be difficult. Working with up to fifty creatives can be challenging – remembering of course I’m working with many others at the same time. And because an editor says a story should follow this or that path, doesn’t necessarily mean the editor is right. It can be subjective. Stories especially vary in quality, and it’s the editor’s job to get some rough stones and polish them to gem standard. Hopefully, and with the help of several others here at Ford Street, I’ve managed to do this.

JF: You’re a writer, editor and publisher – how do you fit it all in?

PC: I think I’ve edited around a dozen anthologies. This doesn’t include 45 collections Meredith Costain and I edited for Pearson (Spinouts and Thrillogies). I’ve published around 100 + books over the years, and written around 150. Running Creative Net Speakers’ Agency and the seminars/festivals does keep me busy!

JF: What are you currently working on?

PC: Right now I have three plays and two short story collections (the latter in collaboration with Meredith Costain) coming out from other publishers. This year I published around 16 books. I have my first 2016 title, Dance, Bilby, Dance, by Tricia Oktober, ready to go to the printer.

JF: How did you get started as a writer and what led you to publishing?

PC: I self-published my first novel at the age of nineteen. Realising it wasn’t good enough, I figured I’d move into publishing other people’s work. I published Australia’s first heroic/epic fantasy novels in the early 80s. I also published science fiction books. Losing distribution I returned to writing. My first book was published by HarperCollins in 1995.

JF: You’re best known for your fantasy and science fiction writing – what appeals about those genres?

PC: They’re as far away from contemporary as you can get. I think we live the lives of those people we read in contemporary novels, so why read about them? I can’t imagine why people watch TV shows like East Enders and Coronation Street, or the spate of reality TV shows. Big Brother for example must have been one of the most boring shows anyone could watch. And that’s what I feel about contemporary fiction.

JF: Does your personal passion affect your publishing decisions?

PC: No. I have published contemporary fiction, for example. I don’t just stick to fantasy and science fiction. If I think something has quality and there’s a market for it, I have to make a commercial decision.

JF: What do you wish you’d known when you started?

PC: The massive database I’ve built up over the years, contacts with book clubs and others who buy bulk books. Basically, knowledge that you need to be successful. Alas, unless someone sits down and gives you a list, you need to find all this stuff out yourself. And that takes years.

PC: Persistence is the key. The Wizard’s Torment was my first book – that’s the one that sold to HarperCollins. I had written it in the early 80s. It took me around twelve years to get it published. I wrote another book at the same time called The Earthborn. That was rejected by just about every publisher in Australia. An agent sent it to TOR in the US and sold sold the trilogy over there. I mentally thanked every Australian publisher that had rejected it. Just never give up.

JF: Thanks Paul, and good luck with Rich and Rare!

Paul Collins has edited many anthologies including Trust Me!, Metaworlds and Australia’s first fantasy anthology, Dream Weavers. He also edited The MUP Encyclopaedia of Australian SF&F. Paul has been short-listed for many awards and has won the Inaugural Peter McNamara and the A Bertram Chandler awards, both of which were for lifetime achievement in science fiction, and the Aurealis and William Atheling awards. His book, Slaves of Quentaris, features in 1001 Children’s Books You Must Read Before You Die (UK, 2009).

Julie Fison writes for children and young adults. Her books include the Hazard River adventure series for young readers, Choose Your Own Ever After, a pick-a-path series that lets the reader decide how the story goes, and Counterfeit Love for young adults. Her latest short story – Sugar is Sweet is in Rich and Rare.