Both of these books are quite extraordinary in the way they tell their stories. They play with the story-telling format and give us something quite unique.

I’m going to avoid plot spoilers, but I am going to talk about the structure of the books and the way the stories are framed. If that bothers you, better leave now. 🙂

Illuminae is science fiction, with elements of space opera, horror, action/adventure and healthy dose of teen romance. All bundled together in an unlikely way.

Kady and Ezra are teenagers living in a mining colony on far flung planet in the future. When their colony comes under attack they, and the other survivors, are forced to flee. Pursued through the depths of space by a rival mining company determined to wipe out all witness to the attack, they also have to deal with an insane computer, a horrifying contagion and their own feelings for each other. Illuminae plays with narrative structure and with presentation. This book has a plot and characters that you get to know and care for, but it is not structured like a novel. Rather than a traditional narrative, be it first or third person, it is, instead, a dossier of hacked documents. Military files, personal emails, medical reports, interviews and other such things are compiled into a patchwork of storytelling with comments from the dossier compiler, the mysterious Illuminae of the title. So you get a range of perspectives. And added to all this are the thoughts of an artificial intelligence that is loosing its sanity. This book has words, lists, pictures and even word pictures. It is an extraordinary compilation of unexpected stuff. Looking at it, I can’t help thinking that it shouldn’t work – that a bunch of mismatched documents couldn’t possibly draw you into a story, emotionally grasp you and make you feel for the characters. But it does. It does all these things with greater success than most standard novels. And it’s a page-turner!

As a bit of a pop culture junkie, I love the hidden references peppered throughout the novel. My favourite are the allusions to The Princess Bride.

I’ve heard some people grumble a little about the ending – not liking the ‘revelation’. But I think it’s perfect. It sets things up for the next book, Gemina. I’m now anticipating its release and wondering if this second (and third) book will maintain the same storytelling approach, or default to a standard narrative… or maybe even give us something completely different and unexpected.

I loved this book so much. I found it difficult to believe that I would read another book as good as this one any time soon. But the very next book I picked up was even better… 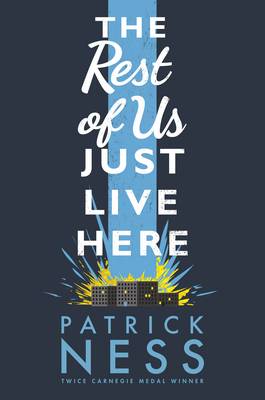 The Rest of Us Just Live Here plays with narrative structure and with story focus. It swaps the traditional focus ­– pulling the background characters into the foreground, while pushing the ‘chosen ones’ off to the sidelines. And tells the story in a very particular way.

The big picture story is told only in the short chapter intros, before the more intense, personal stories of the bystanders is told within the chapters themselves.

“Chapter The First, in which the Messenger of the Immortals arrives in a surprising shape, looking for a permanent Vessel; and after being chased by her through the woods, indie kid Finn meets his final fate.”

The novel proper is about Mikey and his friends. They’re not special. They try not to get involved. They just want to make it through the everyday struggles of high school. But the weird goings on in their town keep getting in the way. You might think that a novel about people trying to avoid getting involved wouldn’t be interesting… but it is. Their problems, their relationships and their lives are deeply fascinating. The key to it all is that Ness creates such believable characters and tells a tale of friendship. They feel like real people.

One of the things that I love about this book, is the back-story of the town itself. The fact that weird things have happened in the past. And the fact that most people just ignore it all, pretending that everything is normal.

The Rest of Us Just Live Here is written in first person, present tense. I don’t usually like this approach, but it is very effective in this in case. It gives the story an immediacy and the reader an intimacy with the lead character. It allows us to get into his head and find out how he thinks. It is particularly striking in that Mikey has obsessive compulsive disorder, getting stuck in what he calls ‘loops’ — repeating patterns of activity that he finds increasingly difficult to break free of. Never before have I read anything that conveys the struggles of this condition quite so personally and effectively.

“I tap the four corners of my textbook again, counting silently in my head. And again. And one more time. I see Jared watching me but pretending not to.”

And then there’s Chapter 16. Fifteen pages of nothing but dialogue. Extraordinary!

There is so much depth in this book – layers of character and story. Without a doubt my top read of 2015. If ever I was in the uncomfortable position of having to choose my five favourite books (because no one should have to do that impossible task), this would be one of them.

If you read no other books this year, at least read Illuminae and The Rest of Us Just Live Here. You won’t regret it.

One thought on “2 Awesome YA Books”