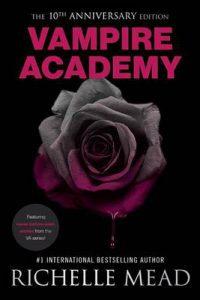 While my staple diet of books consists primarily of non-fiction books about what’s messed up with the world and how we can possibly mitigate the issues, every so often I need to take a break from the all-too-real difficulties and escape into someone else’s figments of imagination. Richelle Mead’s Vampire Academy series is one such escape for me—a series I’ve followed and re-read with a mix of shame and shamelessness.

So I met the announcement of a 10th anniversary edition of the book that kicked off the series—one that contains some side stories Mead’s long wanted to tell that will answer questions many readers have—with slightly giddiness. Then I promptly commenced a countdown until its release.

‘Vampire Academy worked—far better than I’d ever expected,’ Mead wrote of the series’ initial success. ‘I’d fallen in love with the Romanian myth of two races of vampires, and I became obsessed with visualising how they’d create societies within our society. I’d read countless books about kickass heroines but never about how they became that way. What did they do while they were young? How did they temper a reckless nature with doing the right thing? And of course, there was the romance piece: just a tiny flicker of an idea about a girl in love with her mentor and the fallout that ensued.’

Yeah, that whole tempering of a reckless, youthful, badass heroine nature is definitely intriguing and explains in part why the books have been the successes they have been.

So how does the anniversary edition hold up, some 10 years on from the original publication?

The bulk of the book is a reprint of the original, which I enjoyed re-reading once I got over the surprise that the book contained this reprint. In truth, it’s savvy repackaging of existing content to revitalise sales and I was completely suckered by it.

Still, its latter pages contain the promised short, arguably deleted chapters or chapters that could and should, with hindsight, have appeared in the original text. Whether Read had them in her back pocket or wrote them in response to the questions she is most frequently asked I don’t know. What I do know is that it was great to gain even slightly greater insight into the plots and characters.

The stories cast light on some enduring mysteries, such as how did Christian’s parents turn into strigoi, what running away from school was like for Lissa and, most pressing of all: what did the elusive, poker-faced Dimitri truly think of Rose.

My favourite of the new story additions was one that focused on Dimitri and Rose plus a—of all things—forbidden treasure hunt. Think seniors engaging in an elaborate scheme to obtain items of importance from various staff members, snaffling them out from under the staff members’ noses all the while in constant danger of discovery and detention. Yep, it was good fun. And not entirely unlike a cut-down version of an escapade you’d see in Harry Potter.

Overall, the new chapters feature yet more of the snappy banter we’ve come to know and love:

His grin widened at the thought of the permanently detention-ed Rose’s efforts. ‘Let’s hang out sometime and find out. If you ever get parole.’

Not to mention how her battle cry gave her away during those training sessions with Dimitri: ‘Would it really have made a difference if I’d been quiet?’ Rose asks. Dimitri thought about it. ‘Probably not.’

Oh, and some overheard conversations courtesy of Roses and Lissa’s psychic connection: ‘…Christian—who I could hear…telling some kid it was impossible to make a manatee out of a balloon…’

Basically, the Vampire Academy anniversary edition is most of what we already know plus a little bit more. My only constructive criticism of it is that I’d have loved it to have included more new stories—the ones it includes are a good taster, but they’re just that. Fans like me who continue to hanker after the now-wrapped-up series are always going to be hoping for more.